The Colony
By: Blake Crane

Get to the choppah!
Buy It From Amazon
Buy It On DVD
Buy It On Blu-Ray

In The Colony a future Earth is in the throes a new ice age, survivors forced to flee the frozen surface for a tribal-like existence in underground bunkers. As a voiceover tells us, “one day it started snowing and didn’t stop.” Colony 7 uses hydroponics to grow food and harvest seeds, melts snow for water, and harnesses the wind for power. If you have to live underground, you could probably do a lot worse. You could also do a lot worse in choice of post-apocalyptic survival film, but The Colony never rises higher than satisfactory B-movie diversion.

An opening that explores the labyrinth of underground tunnels complete with gray walls and rusting pipes is an interesting enough hook. The movie shows us a lot without feeling the need to explain everything, and we get a good sense of the workings of this group. Laurence Fishburne is Briggs, the leader that is a refreshingly dialed-back version of the actor’s Morpheus from The Matrix series, replacing the goofy philosophical hokum with an admirable and genuine stoicism.

As good as things may seem all things considered, the group’s numbers are dwindling due to the flu and Brigg’s ex-army buddy Mason (Bill Paxton) is becoming a bit unhinged. He’s breaking established rules of the civilization as he sees fit, signaling the start of a breakdown. Also troubling is a distress signal from a sister colony. In a society based on fragile order, Briggs doesn’t hesitate in putting a small team together for a long trek across the snow to check in on their comrades. Volunteering for the mission are Sam (Kevin Zegers), a smart and beloved member of Colony 7, and also young Graydon (Atticus Mitchell), a secondary character with grim prospects of survival.

The back half of the film ratchets up the sci-fi/horror elements, quickly devolving into a protracted chase and survival sequence that doesn’t contain any real chills. Briggs, Sam, and Graydon discover a pack of bloodthirsty cannibals has decimated the other colony – their leader complete with scars and pointed teeth. The trio runs, the pack chases… and not much else happens. Putting a monstrous face to a menace that isn’t fully realized removes any serious tension. Like most of the film, the terror of the cannibals only goes halfway; they’re just kind of there and attack straight ahead.

The Colony juggles a few other tried and true post-apocalyptic plotlines that aren’t really fleshed out, including a mysterious video broadcast proclaiming that one of the weather-altering machines built to combat the ice age has successfully melted a section of permafrost.

There is nothing in this film that hasn’t been done before, or done better. But the subject matter has also been handled a lot worse. Veterans Fishburne and Paxton bring the bravado of meaningful icy stares and cold reality, while Kevin Zegers is perfectly adequate as rational warrior Sam. Also worth mentioning is Charlotte Sullivan as Kai, Sam’s love interest and Colony 7’s Jill of all trades. In her few scenes she’s believably sweet and tough, and apparently has access to a really good hair and makeup artist in the bunker.

In a way it’s admirable that director Jeff Renfroe is able to commingle all of these elements into a competently made film with a limited budget, but the teetering tower of building blocks used to construct the story also contributes to a lack of narrative cohesion. Meandering in tone, The Colony loses its way a bit on the journey into genre cliché. It is much more interesting when examining the human element within the actual colony, rather than the cruel icy world and its manufactured villainy.

The Blu-ray release of The Colony is a veritable wasteland of special features, with only a standard 10-minute behind-the-scenes featurette. 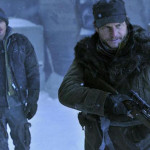 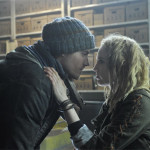 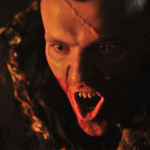