Sure, but my hair is higher than yours.
Buy It From Amazon
Buy It On DVD
Buy It On Blu-Ray

There hasn’t been a movie as contrived and cockeyed as Collateral Beauty. It has the kind of story that only producers in a pitch meeting can make sense of. It wants to be profound but just ends up problematic and it wastes an amazing cast on a concept so threadbare and manipulative that, once it’s over with and the final twist has been revealed, all you can do is shake your head in unsatisfied disbelief.

It’s another in a long line of Will Smith weepers, not as notable as Seven Pounds or Pursuit of Happyness, but just as awful as his cameo as Satan spin in Akiva Goldman’s horrible Winter’s Tale. But the former Fresh Prince is not the only reason this ridiculous movie fails. It’s impossible to believe that anyone reading this script thought it was good for anything other than lining the family cat box, or filing away in the nearest dumpster.

The story, which is almost impossible to follow, see Smith as a hot shot ad exec in NYC. He is joined in his enterprise by pals Whit (Edward Norton), Simon (Michael Pena), and Claire (Kate Winslet) and it looks like there’s good things ahead for the company. Then tragedy strikes, Smith’s Howard Inlet loses his grip on reality, and suddenly, the business begins to falter.

Hoping to keep the company afloat–just long enough to sell it for a huge profit–the trio of pals decides on a radical plan. They know Howard has been writing letters to Time, Love, and Death as part of the grieving process, so they hire three actors to play those roles in real life–Keira Knightley, Jacob Latimore, and Helen Mirren, respectively. Our hero is also seeing a therapist (Naomis Harris) who may hold the key to his sadness. Then mind-boggling B.S. starts to happen.

Considering the talent involved, including Oscar winners and nominees, Collateral Beauty shouldn’t be this bad. How so many acclaimed actors can lay such a monumental egg deserves to be some PhD candidate’s main thesis. The director, David Frankel, is capable of better. After all, he made Miami Rhapsody, The Devil Wears Prada, and Hope Springs. But where the real trouble lies is in the script by Allan Loeb, he of Things We Lost In The Fire, Here Comes The Boom, and Just Go With It fame. His writing is so mawkish and self-absorbed, it never connects with the viewer. Instead, every platitude rings false, every plot twist reeks of a poorly thought out audience “gotcha.”

Indeed, if you survive the first two acts–and that’s a Herculean task for sure–you are left with a finale that tries to fool you. It wants you to take everything you’ve seen before and toss it out the window like so much left over bacon fat. Now, sometimes, such a storytelling ploy can work. Changing perspective from one viewpoint to another is fraught with difficulty, but is quite special when it works. Since nothing–and we repeat, NOTHING–in Collateral Beauty functions well, these last minute pass as painfully as kidney stones. You don’t believe it, the emotion they hope to render is never earned, and the result is a feeling of being cheated, a bigger waste of time than the Sex Pistols final concert appearance.

All of which brings us back to the central core conceit–who believed in this project? Did it read well on paper, or did it discover its own pointlessness during production and just decide to punt? All the actors here will survive, since they have decades of preferable performances to wash away the stink of what happens. For some, Collateral Beauty will be a thinking man’s tearjerker, a clever combination of idea and execution. For most, the movie will function like the title–incomprehensible and almost impossible to explain…or embrace. 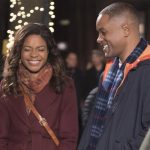 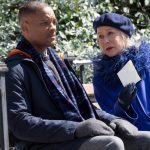 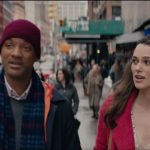