He's the bleeding on the outside kind.
Buy It From Amazon
Buy It On DVD
Buy It On Blu-Ray

Clown’s long journey to release began way back in 2010, when director Jon Watts uploaded a faux trailer to YouTube. His idea of a guy possessed by an evil clown suit was kind of fun in the 80-second trailer; not so much when stretched to 100 minutes. At feature length, the movie struggles to fill time with Nordic evil clown hokum and turns into a depraved, yet boring, procedural, failing to marry the mythology with genuine scares or gross-outs. At best, this monster is fit for a Tales from the Crypt episode, or maybe a segment in a horror anthology. One that would be forgotten.

Friendly dad and real estate agent Kent (Andy Powers) is put in a bind when the entertainment for his son’s birthday party cancels. Luckily, he finds a clown suit in a creepy old trunk in one of his home listings. He puts it on, dubs himself “Dummo the Clown,” and is a big hit at the party. The next day, the suit, the red nose, and the rainbow wig are fused to his body. Naturally, his solution when he can’t wiggle free of the getup is to use a box cutter, and then a reciprocating saw, to cut the costume off. It doesn’t go well.

With minimal effort, Kent tracks down Karlsson (Peter Stormare), who’s able to detail the suit’s history ad nauseam. There’s even a handy illustrated book that’s pored over to let us know one simple fact: he who dons the cursed costume turns into a child-eating demon. Dummo gets hungry, Kent disappears, and his wife Meg (Laura Allen) tries to track him down and save him from transforming.

There’s no question clowns are proven nightmare fuel, and they’ve been used to freak us out in several movies – Poltergeist and It to name a couple. The schlocky Killer Klowns from Outer Space exaggerated the faces of a common childhood fear to help create a cult classic. Unlike those examples, Clown never quite decides what it wants to be. The movie is sectioned off too neatly into droll exposition dump, Kent struggling with his situation, and, finally, killer clown slasher. Kent’s descent isn’t really felt, his character makeover as superficial (and plot-serving) as the bloody red nose on his face.

The biggest sin of the movie is that it’s just not scary enough or silly enough, with the screenplay from Watts and Christopher D. Ford content to drift from beat to beat. The premise is ridiculous, but very little fun is had with the notion of a regular suburban dad unable to shed his embarrassing attire.

When the tone shifts, Watts is careful to not get too ugly with the child-eating clown bits, though several buckets of blood are sprayed across walls and playground equipment. Most of the scare attempts involve characters sneaking up behind other characters – there are at least four occasions.

There’s also no moral or cautionary tale to pull from the artificially nasty proceedings. “Well-intentioned Realtor puts on evil clown outfit and starts eating kids” doesn’t really have a ring to it, nor does it do anything to establish any themes – such as vengeance or punishment for sins, that help give motivation for a movie killer or direction for a horror narrative. I guess the takeaway is don’t wear ancient hand-me-downs — you’ve got no idea where they’ve been. It’s a bit of a shame that the great makeup work by Tony Gardner and his team is wasted on a villain that’s far from iconic.

The cast is fine, with Powers likeable enough (for a time), Allen sympathetic enough, and Stormare weird enough. They’re just slaves to the bland madness. Allen is quite good when her character is faced with terrible choices regarding how far she’ll go to save her husband, but, like most things in Clown, that idea is presented and nothing interesting is done with it.

Here’s to hoping Watts has better results directing his next costumed character (Peter Parker in Spider-Man: Homecoming), because Clown really lives up to the name adopted by its titular jester. It’s dummo. 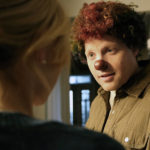 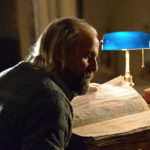 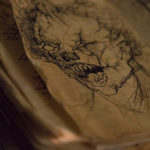