Hey - weren't you The Hulk?
Buy It From Amazon
Buy It On DVD
Buy It On Blu-Ray

Novelty doesn’t necessarily elevate a known quantity. Just because you provide a new twist on an old hackneyed film concept — the political thriller — doesn’t mean audiences will warm to your otherwise repetitive efforts. Such is the case with Closed Circuit, a standard “corruption in high places of power” workout with hopes the setting (London), the technology (the crime in question is captured on many surveillance cameras), and the consequences (a trial in which two lawyers work for the defendant, one privy to confidential, top secret information, the other just around for show) will give the viewer a reason to care. Add in the addition of an on-again, off-again relationship between the two barristers and a contemporary nod to the War on Terror, and the filmmakers clearly think they are delivering something vibrant and fresh. They couldn’t be more wrong.

When a suicide bomber drives a delivery truck into the middle of a bustling English market, the resulting explosion kills several dozen people and injures many more. The police believe they have a suspect (Denis Moschitto), the mastermind behind the act of terrorism, and as he moves into the post-9/11 legal system, we learn that he will have two attorneys working for him. Martin Rose (Eric Bana) inherits the “public” face of the trial after an associate commits suicide. He is the show pony.

He is paired with former paramour Claudia Simmons-Howe (Rebecca Hall), who will evaluate the top secret evidence against their client from the prosecution’s POV. Sadly, they cannot share said information and the rules expressly forbid anyone with a previous relationship from teaming up. So Martin and Claudia lie about their past, begin their collaboration, and soon find themselves swept up in a case which implicates British Intelligence, the CIA, and the possibility of corruption even higher up.

A strange combination of courtroom yawner and uninteresting procedural, Closed Circuit suffers from a serious case of motion picture déjà vu. Two young guns suddenly discover that those in office might have an agenda to frame a foreign national for a crime that helps their own internal cause more than that of the supposed enemy we are fighting? You don’t say? A couple of characters will circumvent all the rules to try and uncover this conspiracy, constantly avoiding attacks on their own character and person? Really? An opening sequence that sells us on the setup, only to never again offer up anything equally engaging or fresh? Absolutely. A third act descent into pointless chase scenes and action? Sadly, yes. Nothing about screenwriter Steven Knight’s story is original or unusual. Instead, he places us smack dab into a world we know all too well and then lets his obvious knowledge of the UK legal system take over.

If you’re a fan of closed door courtroom proceedings and the occasional Sorkin-like witness histrionics, you might like Closed Circuit. The performances are decent (Bana is more or less inert, but Hall makes up for it with her kinetic intelligence) and the direction by John Crowley helps broaden our already established familiarity with this kind of material. But the various clues and the ultimate reveal are so unsatisfying, it’s like Jodie Foster traveling through wormholes in some kind of alien transportation device only to end up on an extraterrestrial simulation of a sunny beach talking to a hologram of her dead father. We want something that goes to the very heart of our obsession with terrorism, not the same old “espionage is evil” tropes.

Indeed, when treading over well worn, highly recognizable cinematic plot paths, it’s not good enough to simply deliver the standard strategies. Closed Circuit wants to argue for its post-millennial, post-modern import. Instead, it can barely hold its own — legally, logically, or logistically. 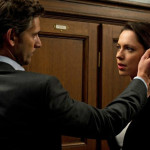 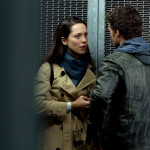 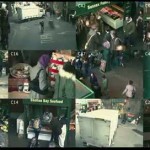