I'm a grown-up now.
Buy It From Amazon
Buy It On DVD
Buy It On Blu-Ray
Buy The Book

For those of us who grew up during the ’60s and ’70s, the Cold War with the Soviet Union and its various Eastern European offshoots (which made up the isolationist “Iron Curtain”) were a constant source of dread. Not only did we fear all out war with the superpower, but we knew almost instinctively that the conflict would end in nuclear annihilation. Of course, once the ’80s rolled along, we learned that these nations were more to be pitied than feared. Cannibalizing themselves (and each other) for the sake of presumed global power, the eventual implosion and rise to outside ideals showed the West that, even within such a closed, controlled community, chaos could rein.

During said turmoil, the world learned of a notorious serial killer named Andrei Chikatilo who was eventually caught and convicted of murdering over 50 women and children (and many more, if you believe the stories). According to the USSR, such crimes were a “capitalist” concern, and would never happen in their beloved political “paradise.” Still, from 1978 until 1990, Chikatilo left a trail of death so defiant that he practically dared the Russian authorities to catch him. Sounds like the basis for an intriguing film, right? Well, it was one back in 1995, when HBO delivered Citizen X starring Stephen Rea, Donald Sutherland, and Max Von Sydow.

Now comes Child 44, a confusing, overcomplicated take on the same source that fails at almost every level. Granted, it has some very good performances. There’s even a couple of great scenes. But overall, the script by Richard Price and the direction by Daniel Espinosa spend too much time on the ancillary and the asides. What we really want is a Soviet Silence of the Lambs. What we get is a collection of subplots keeping our characters from achieving their aims before the final derivative genre denouement is dropped in our laps… and even then, the resolution is just as unsatisfying as the rest of the nonsensical narrative.

We are introduced to two MGB agents, Leo Demidov (Tom Hardy, in a thick accent) and Vasil Nikitin (Joel Kinnaman). The former is a war hero. The latter is a jealous colleague who abuses his power. Vasil’s envy turns terrifying when he accuses Leo’s wife Raisa (Noomi Rapace) of being spy. This challenges our hero’s loyalty. His response requires a demotion, and Leo is soon working with General Mikhail Nesterov (Gary Oldman) to solve the death of a comrade’s son. Turns out a lot of dead bodies have been discovered along the train tracks to Moscow. While it appears to be the work of a serial killer, we are reminded that there is “no such thing” in the glorious USSR. As he fights both government bureaucracy and his own interpersonal struggles, the identity of a possible suspect emerges.

Like numerous films based on true events, Child 44 can’t capture the inherent intrigue of reality. A straightforward telling of the Chikatilo case would be horrifying enough (his crimes were brutal). Sadly, the source novel (by Tom Rob Smith) thinks it can better the narrative with numerous tangents and Cold War complements. There are elements of the backstory that work (Leo’s past, and his presence at the taking of the Reichstag, provide some nice depth) but the overall effect is to lessen the impact of the procedural. What makes a good thriller are the mechanics, the ins and outs of the police work and the conclusions collected as a result. It should all build to a brilliant standoff. Child 44 doesn’t have such drive.

Instead, it’s just a collection of pros and cons. When it works, we get caught up in the intrigue. When it doesn’t, we wonder why so much emphasis is placed on the politics (and Vasil’s villainy) and not on the poor victims. Child 44 may look and feel like a piece of history. In reality, it’s more an exercise in empty histrionics. 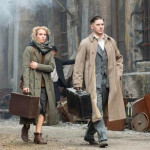 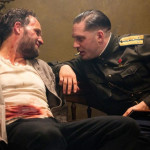 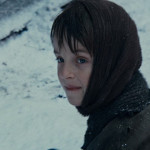