She'll Chew You Up.
Buy It From Amazon
Buy It On DVD
Buy It On Blu-Ray

It may seem weird that an Ancient Greek playwright known for comedy receives a writing credit on a 2015 Spike Lee film focusing on the epidemic of gun violence in Chicago, but as adapted by Lee it works. In Aristophanes’ Lysistrata the titular character attempts to end the Peloponnesian War by withholding sex from the men of Greece. That plot is also central in Chi-Raq, though the fact that these strong modern women hatch their plan after stopping at a coffee shop named Deus Ex Machina gives a hint as to how soberly Lee looks upon the device. It’s used for high-order satire that’s passionate and playful in its pleas to stop the madness.

The opening few minutes offer a barrage of information, including: a rap song with words emblazoned across the screen – forcing us to read the message behind the verse, flashing red letters declaring “This is an Emergency,” statistical reminders that in the past 15 years more Americans have been killed in Chicago than Iraq and Afghanistan combined, and an introduction from Samuel L. Jackson’s narrator, who appears from time to time to set the scene and provide some on-the-nose exposition. This is followed by a performance by South Side rapper Chi-Raq (Nick Cannon), who raps “Pray 4 My City” before the club is shot up and two rival gang members are wounded. It’s a blistering beginning that prepares us for the wild shifts in tone and language of this heightened version of the Chicago streets.

Chi-Raq may ask people to pray for his city, but his actions contradict his lyrics. When rival gang leader Cyclops (Wesley Snipes) sets fire to his home, Chi-Raq gives chase, spraying bullets down the street. This forces his girlfriend Lysistrata (Teyonah Parris) to move in with wise neighbor Miss Helen (Angela Bassett), who’s well-versed in strife. After mother Irene (Jennifer Hudson) loses a young daughter to a stray bullet, Helen schools Lysistrata and inspires her to do something. Banding together with all neighborhood women, Lysistrata starts a local movement — a sex strike culminating with a standoff at a U.S. armory – that goes global.

Parris, Bassett, and Canon all give powerful performances that sell the whimsy and the bigger message behind it. Lee is sly with his depictions, sneaking in statistics and facts within vivid, rhythmic conversations that would likely come off as disingenuous if attempted as straight melodrama. The satire provides more opportunity to find the truth underneath the chaos, notably in a dinner table conversation between Lysistrata and Helen and an impassioned sermon from a local pastor (John Cusack) deriding the “self-inflicted” genocide and larger picture behind it. The struggle is definitely real, and it feels real when we see photos of real-life victims of the violence.

Lee is also even-handed in his biting commentary, pointing fingers in several directions. There’s plenty of irrationality to go around, from the prideful, misguided gang members, to the power structure, and the political machine that drives it all. He also starts small focusing on the troubled neighborhood before pulling back – and finally halfway through showing the iconic city skyline and shoreline – to incorporate the police force and the wacky mayor (D.B. Sweeney), who’s more concerned with saving face than actually fixing anything.

However goofy Mayor McCloud is portrayed, life imitated art, or vice-versa, when Chicago’s actual mayor met with Lee to tell him his film, and specifically its title, shone an unflattering light on the city. That mentality is a big part of the problem. Of course, what actually plagues Chicago is the very real gang warfare, children being murdered, and scheming in the establishment that breeds mistrust.

There’s no easy solution, which Chi-Raq gets, though it also makes it difficult to come to a cinematic resolution. The final third of the film isn’t as strong as what came before, and there’s some pat wrapping up of story business that doesn’t provide a narrative gut punch when surrounded by the wide-reaching causticity. There are also some deep, frivolous diversions – among them a life insurance salesman who visits Miss Helen, and a lot of time spent with a group of men protesting the women’s protest – that feel a bit like issue-cramming, but the big picture is still effective. Chi-Raq doesn’t have the answer, and how could it? But in the midst of this emergency, it’s a tangible document that may start a conversation or two. At least that’s a start. 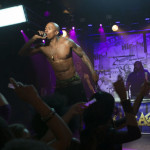 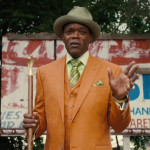 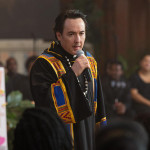