Uncertain woman.
Buy It From Amazon
Buy It On DVD
Buy It On Blu-Ray

A train rumbles through the Montana countryside, billowing smoke and blowing its horn. Back in town, a friendly radio deejay reminds residents to make sure the water in their dogs’ bowls isn’t frozen. The sights and sounds, and stillness, of Middle Americana set the tone for Certain Women, another mastery of mood and everyday ambiance from writer/director/editor Kelly Reichardt (Wendy and Lucy, Meek’s Cutoff). She makes the mundane riveting and finds the relatable feelings present in ordinary routine.

In adapting short stories by Maile Meloy, Reichardt connects the lives of busy women navigating their daily grind and taps into varying shades of loneliness and yearning. Lawyer Laura Wells (Laura Dern) is dealing with a distant married lover (James Le Gros) and a persistent client (Jared Harris) who won’t accept her opinion regarding his workman’s comp claim. He immediately accepts the exact same opinion from Laura’s male colleague.

Next, we meet Gina (Michelle Williams), who’s building a family home on a serene creek-side lot. When we meet her husband and surly teen daughter (Sara Rodier), there’s the immediate impression that relationship repair is more important than homebuilding. Less directly related to the first two sections, the final story follows isolated ranch hand Jamie (Lily Gladstone), who wanders into a class being taught by young lawyer Beth (Kristen Stewart). Jamie is instantly smitten and begins a friendship with the instructor that involves going to the local diner after each lecture.

All of these situations remain muted and grounded in real-life without pushing the drama too far. Even a potentially harrowing encounter involving Harris’ character is kept unglamorous, focused on the interactions of those involved and how it exasperates Laura. Reichardt resists common methods of heightening the stakes – swelling score, furious editing, etc. – to instead wallow in the moments, which has a cumulative, lasting effect.

Watching Jamie, and hearing the ambient sounds of cleaning stables and feeding horses, we understand the monotony, which also makes us recognize her gravitation towards Beth. A four-hour drive is represented by looking through a windshield, the passage of time marked by the darkness of the highway, the changing signage, the drone of passing cars, and the in-and-out static of the radio. When the driver gets to their destination with a fatigued look on their face, we feel the weariness – in a good way.

The actresses probed by the camera’s unobtrusive gaze all completely buy into the minimalist approach. Dern projects competence and quiet frustration without appearing frazzled. A frequent Reichardt collaborator, Williams has the least direct confrontation with her trials, though she’s great at being sympathetic one moment and suspect in her interactions with others the next. Her detachment from her husband and daughter is apparent without being overt, and her dealings with a confused elderly man (a very good Rene Auberjonois) to procure sandstone for her building project feel a bit like taking advantage. Complicating the sentiment of this scene, the man responds mostly to Gina’s husband, again raising the issue of gender roles.

In the final section, Gladstone and Stewart are both fantastic. Gladstone’s subdued enthusiasm makes us root for her, but the perma-smile in Beth’s presence and a couple of decisions she makes skew our feelings more towards pity.

Surrounded by the wide open, beautiful Montana landscapes these women are adrift and Reichardt makes their daily lives, filled with common complications, hypnotic. We’re caught up in the character studies and even minor things, viewed plainly and honestly, feel like a big deal. 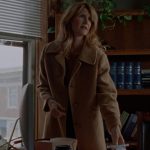 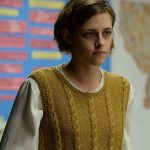 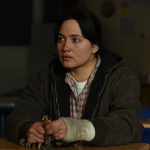