Carthenge - the 8th wonder of the world!

Loveable losers who hate their lives are a staple of independent films. Stack up all the movies about them and the pile would probably reach all the way to Mars. In a way, though, it makes sense. If you don’t have the budget for explosions, shootouts, and CGI creatures, what can you put in to grab the audience’s attention? Most people have, at some point, found themselves dealing with some form of personal, professional, and/or romantic ennui. It’s just natural fodder for indies. The independent feature Cement Suitcase doesn’t reinvent this proverbial wheel, but it does give us an appealingly lovable loser who hates his life, and it tells this guy’s story with some wit, while also earning a few nods of recognition.

Franklin (Dwayne Bartholomew) is a salesman at a winery. His approach is to create an atmosphere of fun that entices visitors to stock up on the beverage. The problem is, he hates the job and the people he works with. He’s also still mourning the death of his mother and trying to avoid having to sell her house. Those things alone would be depressing, but there’s one more: His girlfriend, Charlene (Kristina Guerrero), is cheating on him. It’s this last one that most sticks in his craw, especially since he can’t muster up the nerve to confront her. One day, the guy she’s cheating with, a country club golf pro named Brad (Shawn Parsons), comes into the winery, chats up Franklin, and ends up inviting him out for 18 holes. Curious about this guy Charlene is running around with, he does the passive-aggressive thing and excepts the offer, not telling the clueless Brad that they’re sharing a girlfriend. Rather than providing answers, it only ends up depressing Franklin more. A reprieve from his anguish comes in the form of Jackford (Nathan Sapsford), a goofball Aussie who becomes his roommate. Jackford has a “go with the flow” attitude, and pushes his new roomie to embrace happiness through a series of juvenile stunts, such as building a sculpture out of shopping carts.

Cement Suitcase has a powerful secret weapon, and his name is Dwayne Bartholomew. The actor possesses natural screen charisma, as well as a sharp sense of comic timing. He makes Franklin’s despair relatable, without ever turning him into an insufferable mope. Bartholomew’s best moments are the ones where his character emotionally self-flagellates, forcing himself to golf with the man who’s turning him into a cuckold or allowing himself to get drunk on the job. Such scenes could have been played for false drama, yet they take on an empathetic, and even humorous, quality. We feel bad for the way Franklin treats himself, even as we giggle at the sight of him digging his own hole. Writer/director Rick Castaneda guides his lead actor through a series of incidents designed to get at a fundamental truth: it is possible for us to be our own worst enemies. Franklin can blame Charlene for cheating, or his no-nonsense boss for being a jerk, or Brad for stealing his girl, but at the end of the day, his problems are the result of his inability to seize control of his own life. He’s more comfortable being depressed than he is being happy. There’s an old saying: you know someone just like this, and if you don’t, that person is you.

All this plays out with sly humor and identifiable poignancy, so it’s a bit of a shame that Cement Suitcase doesn’t trust its own strengths more. The story’s biggest problem is Jackford, whose entire existence in this movie is to inject a forced sense of wackiness that’s at odds with everything else. He is a male version of the Manic Pixie Dream Girl cliché. Jackford encourages Franklin to perform a series of ludicrous stunts, including jumping into the window of a passing car and setting a cement-filled suitcase (hence the title) outside of a train station to watch people helplessly try to lift it. The point is that he loosens Franklin up, showing him how to have fun and be carefree again. However, these moments all feel overwritten and false, and they lead to a final scene whose blatant contrivance robs it of the meaning it could have had. This is a pretty good film, but it would have been a lot better had it provided Franklin with a more down-to-earth impetus for his personal growth.

In the end, the stuff that works in Cement Suitcase works well. It’s funny and honest about the ways in which individuals defeat themselves. But its primary flaw is a big one, and that can be hard to overlook at times. Still, Rick Castaneda shows promise as a filmmaker, and Dwayne Bartholomew proves to be a real discovery.

Cement Suitcase is available on cable VOD, as well as other digital platforms, including iTunes, Amazon, and Vudu. 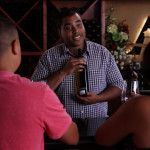 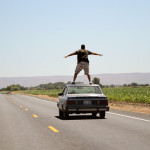 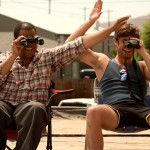