At the twilight's last gleaming...

Any of those stories is dangerous stuff and we get the picture from the opening sequence, in which masked men are making huge batches of crystal meth under cover of darkness in the middle of God-Knows-Where. Los criminales seem to take a liking to the filmmaker (Heinemen’s also one of the movie’s cinematographers) saying if life had treated them a little better, they could have a nice, respectable job like his. Instead, they’re mowing down families and dismembering the innocent, as we learn through first-person accounts and all-too-graphic footage.

The state of Michoacán has had enough of the terror, and becomes ground zero for the “Autodefensas,” an armed group of regular citizens with massive balls and matching T-shirts, ready to hunt down cartel leaders. Their leader, Jose Mireles, is an older, soft-spoken man who’s a well-known family physician, a persona that goes against the expected grain.

With a well-metered rhythm, Heineman and accomplished documentary editor Matthew Hamachek take us between Michoacán and a barren part of the U.S.-Mexican border, where a guy named Tim Foley leads a group of Americans who take down those attempting to cross illegally. There’s a distinct difference between the efforts of Mireles and Foley: Mireles is responding to torture and murder in his backyard. Foley has brought himself to the problem, a guy who’s set up shop in southern Arizona after losing jobs to non-resident workers. Is this personal anger masked as patriotism? It’s hard not to wonder if Foley would have warned against “the Red under your bed” in the 1950s. Heinemen gives Foley plenty of on-camera time, and the man’s transparency about his troubled life certainly doesn’t clear up his motivations.

Say what you will about their battles, but both groups are successful in taking down their enemies and handing them over to the “proper” authorities. This adds an unexpected layer of complexity to Heineman’s story, bringing into question how much room a heavily armed, non-sanctioned group should be given to roam. Foley and his girlfriend – who occasionally resemble the “preppers” you see on TV – feel a sense of purpose and despise use of the term “vigilante.” A spokesperson of Mireles’ is challenged at a town square meeting. Nothing is cut and dry.

Cartel Land won the Special Jury Award for cinematography at this year’s Sundance Film Festival, a certain result of the war-like coverage the photographers deliver. In a pivotal scene, the Autodefensas locate two cartel leaders in a local shop and push in to grab them. We’re running right alongside the rebels, their guns firing and voices hollering, chaos up and down the street. What it takes to get that shot is what makes Cartel Land an effectively tense look at potential change in progress. 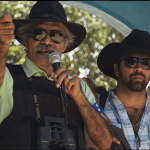 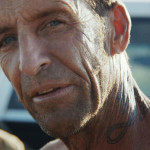 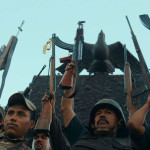