In 2012, it topped the list of banned books in the United States. Librarians and school officials claimed the kiddie level novels promoted potty mouths, toilet humor, and an anti-authority approach to being young. So it’s seems a bit surreal that a mere five years later, Dreamworks animation would bring the adventures of grade schoolers George Beard (Kevin Hart) and Harold Hutchins (Thomas Middleditch) to the big screen.

Gone is the controversy, and in its place, a wildly effective and fun animated comedy. Sure, this is still sophomoric stuff, the kind of wit that makes kids snicker and adults roll their eyes, but it’s genial and enjoyable, with its heart in the right place. Sure, Captain Underpants: The Epic First Movie can’t match the other animated offerings out there in terms of aesthetic grace, but like a naughty riddle scribbled on a grade schooler’s text book, it’s a hoot.

Those familiar with the books know that the film is set at the Jerome Horowitz Elementary School. George and Harold are BFFs and enjoy playing jokes on the staff, including their blustery principal, Mr. Krupp (Ed Helms). When the pair tinker with an invention called the Turbo Toiler 2000, created by resident smartypants Melvin (Jordan Peele), they get in trouble.

With Krupp threatening to separate them and end their friendship, the boys hypnotize the angry administrator, turning him into the title character. With the arrival of a new teacher to the school–one Professor Poopypants (Nick Kroll)–the stage is set for a showdown between the Captain and this new foe, who is out to end laughter all together in hopes it will keep people from giggling at his name.

From its bathroom level punchlines to its pre-adolescent rebelliousness, Captain Underpants: The First Epic Movie finds a terrific balance between superhero dogma and juvenile joking. The source material is pun-heavy and plentiful in its desire to entertain the intended demo, and the irreverence author Dav Pilkey infused into every page of his novel series is here in abundance. Even the reasons why the education system originally balked are on the display in abundance.

Hart and Middleditch are excellent as the voices of our underage heroes, their chemistry adding authenticity to George and Harold’s relationship. You believe them as little boys, best buddies, co-conspirators, and perhaps, most importantly, creative outsiders. Helms is also wonderful, bringing authority to his dictatorial figure while being appropriately loony as the Underpants. It’s safe to say that this is some of the best voice-over work the new stunt casting approach to animation has ever offered.

The movie also uses a mixed media approach to some of its storytelling, something that more or less mimics the books. There are hand puppets, pop-up books, and other non-CGI animation techniques which help bolster the basic and simple shapes of the character design. This is a perfect example of a dumb idea done smartly. Adults may think they will be left out of the merry miscreant mix, but there is enough cuteness and innovation to keep everyone, including the still young at heart, entertained.

While it can’t compare to those who are using the animated artform to further redefine the genre, Captain Underpants: The Epic First Movie is a ridiculously fun film which offers piles of smiles and loads of laughs. If you miss those days of giggling in grade school, of hanging out with your friends and sharing something a bit scatological, this is the movie for you. It’s a whole lot of escapist enjoyment. 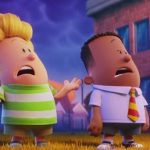 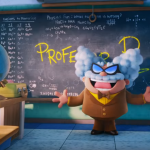 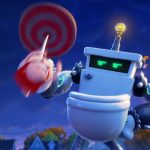