I knew I should have put on sunscreen!
Buy It From Amazon
Buy It On DVD
Buy It On Blu-Ray

Due to their low budgets and frequent popularity on DVD, horror movies don’t have to be blockbuster hits to spawn franchises. In 2003,  Eli Roth’s Cabin Fever earned just $21 million at the box office, yet went on to spawn two sequels (so far). Cabin Fever 2: Spring Fever was famously disowned by its director, Ti West (The Sacrament), after creative differences with the producers and studio. It still did well enough to keep the franchise train rolling, leading to Cabin Fever: Patient Zero, a prequel that documents the origin of the flesh-eating virus first introduced to audiences 11 years ago.

Marcus (Mitch Ryan) is about to be married in the Caribbean. For his bachelor party, his brother Josh (Brando Eaton) gets the bright idea to take him on a boat trip to a remote island for some sun and substance use. Also tagging along are Marcus’s best friend Dobbs (Ryan Donowho) and Josh’s smokin’ hot girlfriend Penny (Jillian Murray). What Josh doesn’t know is that Marcus and Penny once had a dalliance, and there are still some residual feelings left between them. Not long after getting to the island, Penny conveniently strips down to the most microscopic swimsuit imaginable for a dip in the ocean. Upon emerging, her skin gets red and flaky. It burns as it starts melting off her body. Panic sets in. While searching for help, the gang discovers that on the other side of the island is a research facility where a man named Porter (Sean Astin) is being held against his will. He is immune to the flesh-eating virus being studied there by the no-nonsense Dr. Edwards (Currie Graham), which is why he’s quarantined. Porter wants out in a big, big way, in part to find out what happened to his wife and child. Porter’s storyline eventually converges with Marcus’s, which of course leads to even more incidents of people seeing their skin literally crawl right off.

The original Cabin Fever played on fears of disease and illness ravaging one’s body, as well as the general helplessness surrounding such an occurrence. This being the case, it stands to reason that Cabin Fever: Patient Zero would try to up the ante on that concept. In fact, it is here where the film is most effective. Screenwriter Jake Wade Wall and director Kaare Andrews have concocted a handful of genuinely effective shock scenes. The moments in which we see characters being impacted by the mercilessness of the virus are every bit as gory and stomach-churning as they should be in a horror movie of this variety. And let’s be honest — that’s a selling point. No one goes to see a flesh-eating virus movie unless they want to see people experiencing grotesque dermatological deformities. The effects team on Cabin Fever: Patient Zero has done a first-rate job cooking up realistic-looking images that will make you squirm, gag, and retch. For the record, that’s a compliment.

While it’s obvious the filmmakers have their heart in the carnage, their actual story is half-baked. Marcus and his cohorts are one-dimensional and dull, as is the Marcus/Penny romance, so it comes as a bit of a relief when everyone starts rotting like an old banana. But at least something interesting is happening then. Dr. Edwards is, for all intents and purposes, the villain here, given that he does whatever it takes to contain the spread of the virus, even if that entails being not such a nice guy. He’s underdeveloped, though, with motivations that aren’t always entirely clear, thereby making his actions even less so. Porter, on the other hand, is quite interesting, yet the film doesn’t do nearly enough with him because it has to keep hopping back to Marcus and his crew.  Cabin Fever: Patient Zero would be better with Porter as the main character and a story that revolved around his capture and detainment by Dr. Edwards. Then again, that wouldn’t allow for the gratuitous T&A moments that Penny provides.

Cabin Fever: Patient Zero admittedly has a neat twist at the end, and Sean Astin is good in his role. Plus, those gore effects are outstanding. That may be enough for horror buffs looking for a quick, disposable fix of Fangoria-style mayhem. Anyone searching for a story that fully explores the terror of a deadly virus, though, will recognize that the movie lacks the substance to match its unrepentantly bloody style. 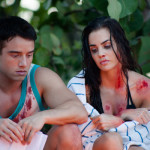 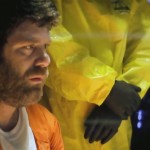 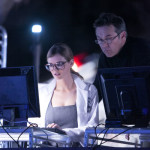