Burying the Ex
By: Blake Crane

I drank your milkshake!
Buy It From Amazon
Buy It On DVD

Films like Gremlins and The Howling established Joe Dante as a beloved bender of genre, mixing fun with freaky to create entertaining and endearing onscreen fantasies. Burying the Ex, the director’s second feature in the last decade, makes strained attempts at wit and weirdness, never fusing the opposing tones into a satisfying whole. Numerous references to horror classics and oddities are (literally) projected in the background and just sit on the narrative’s surface, while the love triangle involving folksy pop personalities feels simplistic and tired. Even when considering that one of the participants is a zombie for most of the film.

Lovable (at least judging by the beautiful women who gravitate to him) horror nerd Max (Anton Yelchin) works at a novelty store. His uptight, vegan, environmentalist girlfriend Evelyn (Ashley Greene) has a career blogging about the cause of the day. After some wishy-washy weighing of the pros and cons of his relationship – yeah, Evelyn’s joyless and controlling, but she’s hot and the sex is great – Max decides it’s time to break things off. Right before he ends it, Evelyn is whacked by a bus. Her funeral is very lightly attended.

Just as Max is getting over the shock and getting chummy with pixieish ice cream shop owner Olivia (Alexandra Daddario), Evelyn crawls from her grave and returns to Max’s apartment, intent on keeping a pledge to stay together forever. The magic is made possible by an enchanted statue that appears in Max’s store, though its mythology is, thankfully, not given a great deal of consideration in the story.

The problems with Burying the Ex aren’t rooted in the contrived plot, but in its artificial characters. Despite the spirited efforts of Greene and Daddario, the females angling for Max’s affection can’t escape caricature. The former is simply the evil bitch, the latter is perfection personified. Evelyn’s portrayed as a drag from the opening scene, even though it seems perfectly reasonable for her to be angry with Max’s ill-mannered half-brother (Oliver Cooper) for using her apartment as a sex den. Olivia’s shop has concoctions named for pop-horror nostalgia and she bumps into Max at a screening of Cat People. She’s even got the kinda edgy and totally cute purple highlights in her hair.

Evelyn becoming a zombie matters little in the grand scheme, other than to have an outward appearance that matches her personality. The more she rots, the worse the makeup gets. Greene has a few good physical contortions and the increasing number of flies buzzing around her head is a nice touch. The notion of her wanting to kill Max so they can be happily undead ever after goes nowhere, more importance placed on Max’s angst over ridding himself of this nuisance once and for all. Yelchin is very good at playing the aw-shucks bro type, though when he speaks the platitudes of Alan Trezza’s script it’s hard to empathize. It seems the message to guys is: don’t allow yourselves to get trapped by a sexy succubus or your life will rapidly decay; you deserve to have your dream girl throw herself at you upon first sight.

Some of the signature Dante jauntiness is on display. There’s a screening of Night of the Living Dead at a Hollywood cemetery, Dick Miller appears for his requisite cameo, and the 89 minutes are paced well enough even though the film never really picks up forward momentum. Too often, Burying the Ex is pandering rather than riffing on its genre influences – the Psycho strings blare after one of Evelyn’s outbursts and The Exorcist is evoked when she projectile vomits embalming fluid. It’s a plainly executed geek show with nothing for horror geeks to get excited about. 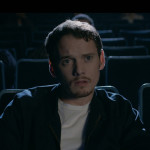 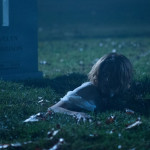 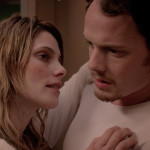