Dakota Fanning’s wide, expressive eyes always did speak volumes. She’s marvelous as a mute midwife who doesn’t need sign language to convey her fear or determination in Brimstone, a Western mystery/thriller that wants to portray women’s lack of power in the Old West but ultimately becomes repetitive.

After an intriguing first act, the film (now streaming on Amazon Video) takes a slow journey by stagecoach to make its point over two hours and 28 minutes. Netherlands writer-director Martin Koolhoven assembles some brutal and beautiful imagery – intestines that serve as a noose, Fanning bundled in black in a stark forest blanketed with snow – along with an impressive cast, including Guy Pearce, Carice van Houten and Kit Harington, the latter two both of TV’s Game of Thrones. While the pacing might not put off home viewers, the story and its themes could have been much sharper by doing more with less.

Liz (Fanning) lives in a small frontier settlement with her kind, farming husband (William Houston), his son, and their young daughter, Sam (Ivy George, currently in TV’s Little Big Lies). Sam assists her mother at deliveries and translates for her, reminiscent of Holly Hunter and Anna Paquin’s mother-daughter dynamic in 1993’s The Piano. Initially, new parents thank Liz, grateful for her help and expertise.

But that thankfulness can turn. When a mom collapses in labor the day a new Reverend (Pearce) appears, the delivery is complicated. As Liz tries to deliver the baby inside the church with primitive-looking forceps, she’s forced to choose which life to save.

This sets up a compelling quandary, as the infant’s father accuses Liz of witchcraft and murder. The Reverend, too, intimates that Liz should not play God. “She decided who was to live and who was to die. Why did she not leave that choice up to Him?”

But there’s more to the Reverend – he has no other name – than his fiery speech and the scar across his eye. This isn’t the first time she’s killed someone, he says, and he’s there to punish her.

Brimstone creates decent tension and suspense early in establishing its mystery. But the reveal isn’t something we haven’t seen before, and the four chapters – two of them flashbacks with titles like “Exodus” and “Genesis” – become tiresome. Women are shown only as prostitutes or wives and have no voice. They’re abused physically and emotionally and risk being whipped, maimed, or worse should they defend themselves. There’s a lot of talk about how “rules are rules” and this is “a woman’s fate.” We get it: Being a woman back then was lousy.

Emilia Jones (High-Rise) plays a delicate and believable version of Fanning’s character as a teen. Van Houten, the sinister sorceress on Game of Thrones, is subdued here as a submissive mother. Harington turns up late in the film essentially playing his heroic GOT character as a gunslinger, lethal but with a decent heart.

The story’s twists are hardest on Pearce, who is most chilling when his undercurrent of menace is palpable only to Liz. The Reverend becomes less dimensional the more he spouts religious rhetoric to justify his cruelty or says phrases such as “the blood has penetrated her life and driven out the innocence” to explain a young girl’s menstruation.

Fanning is riveting to the end, tremulous one moment and resolved another to use whatever resources she can. The film could have taken inspiration from her character and let actions speak louder than words. 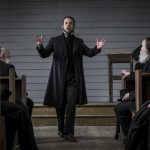 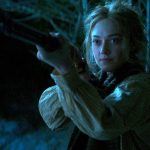