Wu-Tang for life, amirite fellas?
Buy It From Amazon
Buy It On DVD
Buy It On Blu-Ray

Brick Mansions is an efficient and effective B-movie. It doesn’t reinvent the action genre so much as tunnel through the often imitated tropes of the type to deliver its limited delights. As a Luc Besson production, we get borrowed bits in abundance. The film’s premise is lifted almost directly from RoboCop by way of District 13 (which this film is a English language remake of) and the internal narrative mimics Escape from New York as well as several other dreary dystopian dynamics.

We get a true hero (the late Paul Walker), and accidental champion (13 star David Belle), and a cultured villain (the Wu-Tang Clan’s RZA) whose more complex than power crazed. Throw in a combination of that insane running art known as parkour as well as fight scenes suffering slightly from an overcranked/slo-mo delivery and you’ve got something that will keep the testosterone flowing, even if the recognizable story elements threaten to undermine the experience.

Imagine a Detroit even worse than the one now, with an entire housing development corded off from the rest of the city by a concrete wall. There, the population is forced to fend for themselves as the rest of the metropolis is rebuilt. Drugs and violence are rampant inside the so-called “Brick Mansions.” Walker’s decorated detective Damien Collier is still angry over the death of his police captain papa, and he blames the gang’s head honcho Tremaine Alexander (RZA) for the deed.

When a Brick Mansions do-gooder named Lino Dupree (Belle) kills a crocked cop while trying to protect his girlfriend (Catalina Denis) from the bad guys, he suddenly finds himself paired up with our pissed off police officer. Together, they plan on infiltrating Tremaine’s territory and taking him out. Of course, our baddie has an ace up his sleeve — a stolen neutron bomb which he has aimed at the center of new Detroit’s development. Now our duo must defuse the device as well.

With Transporter 3/Taken 2 editor Camille Delamarre doing a decent job as a first-time feature film director and Walker’s obvious stunt double only occasionally glimpsed during the chaos, Brick Mansions is what we like to call “a shot and a beer” cinema. It’s working man and Joe Six-pack in its setup and execution. Showcasing Belle’s ability to literally leap off walls while using its simplistic, goal-oriented plotting to keep the audience engaged, it’s fun, if finite. Reduced to a PG-13 rating from its previous R incarnation, it’s tamer than District 13, if no less rewarding. Sure, back when the original movie premiered (it’s been over a decade), parkour was seen as a surreal Euro-gimmick. Today, there are professional stunt groups and competitions built around it. Back then, Belle was a thin, wiry skyrocket. Now, he’s a bit thicker, but no less impressive, as our determined daredevil.

Walker doesn’t fare as well. He basically is given one note to play — enraged, revenge-oriented son — and he gives it all he can. He’s compelling, if only because Brick Mansions makes his cleverly edited fight set-pieces and car chases so. The rest of the cast are a collection of victim fodder, unknowns, and prop personalities (a strident switchblade sister who’s good with knives is named… Rayzah. Get it?). They function as the human backdrop for all the boffo butt-kicking. Luckily, Delamarre has gleaned most of the good stuff out of the often baffling shaky-cam style of his Besson betters. Yes, there are times when a face off would be more effective with less post-production twaddle, but the end result is still produces the necessary thrills.

For those who loved the original District 13, Brick Mansions will be too little, too late. For your average, everyday moviegoer, however, the novelty of the approach blended with some easily recognizable references means a good time. Not a great time, but a good one. 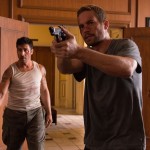 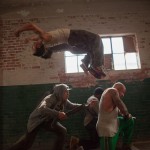 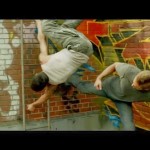