Be afraid. Be very afraid.
Buy It From Amazon
Buy It On DVD
Buy It On Blu-Ray

It’s time to stop raking Tyler Perry and his urban melodramatics over the critic coals. Granted, he’s not a terrific filmmaker and his plotting can best be described as plain and potboiler, but you cannot deny that the man knows his audience and knows how to entertain them.

He’s a populist, playing to the crowd, and doing so in a way that should be welcomed, not rejected. He’s not making art because that’s not what the viewers want. Instead, they are coming to his films to have a good time, and for the most part, that is what they are getting.

So it makes sense that the faith-based phenom would return to last year’s horror comedy Boo! A Madea Halloween for a sequel, seeing as it was the closing thing this amiable auteur has come to a mainstream hit. The funny fright flick crossed over in a big way, turning many onto Perry’s preaching plus pratfalls style.

This time around, however, the horror are real…or at least, played that way. In the original Boo!, the terror was part of a frat boy prank. Now, the title character and her crew head off to a haunted campground where–well, you know what happens in such places. Anyway, Madea (Perry, who also plays the characters Joe and Brian) and her stooges, Bam (Cassi Davis), Hattie (Patrice Lovely), and Viv (Chandra Currelley) must battle monsters, goblins, and a big bad boogeyman.

The reason for this is 18-year-old Tiffany (Diamond White) and the new car that Brian’s ex (Taja V. Simpson) has given her. She heads out to a frat party (yes, again) being held at Lake Derrick, notorious for a series of child murders back in the ’80s. So dad, along with his buddy (Tito Ortiz) head out to stop her, and so does Madea, Bam, Hattie, and Joe. Enter the various fiends. Exit the usual Madea inspired laughs. That’s right–for perhaps the first time in his formidable franchise, Perry’s pot smoking battle ax falls flat. Boo 2! A Madea Halloween is pretty bad.

During his plays, Perry turns Madea into a pulpit, a way of getting his heavy-handed go with God messages across to an audience eager to soak in every Jesus joke and manipulative moral code. He plays the old lady the way the crowd responds, a surreal reciprocal give and take that turns the theater in a strange revival style experience. Film doesn’t work that way, and once the novelty of these characters battling the supernatural wears off, there’s nothing left.

As a pure Perry apologist, this critic found Boo 2! boring, frankly. Instead of expanding his scope to truly lampoon the horror film tropes he trades in, he just wanders around in them. He figures his demo will delight in seeing Madea being chased by a dude with a chainsaw, and visa versa, or Bam babbling like a fool as the fright night histrionics play out. But for the first time since he struck mainstream gold, Perry appears to be coasting, or worse, not caring. He’s capitalizing on past success instead of finding a way to refresh his approach (as the original Boo! did).

And then there is the dubbing. It appears that a lot of Boo 2! was improvised, with many of the choicer words used by the actors rerecorded to stay within Perry’s PG-13 plan. It’s like watching Goodfellas on broadcast television, every “damn” turned into a “darn”, every “bullcrap” replacing a far more scathing epithet. Again, you know why he’s doing this. Perry’s patent aesthetic is made for church, and his fans won’t tolerate taking anything, including the Lord’s name or face or place, in vain.

With a muted Madea and a significant lack of laughs, Boo 2! A Madea Halloween is nothing more than the standard sequel–underdone, underwhelming, and wholly unnecessary. 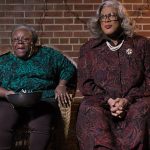 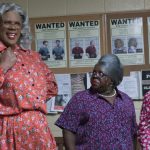 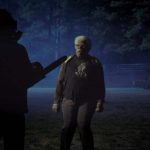 One thought on “Boo 2! A Madea Halloween”