Can I get a jump?
Buy It From Amazon
Buy It On DVD
Buy It On Blu-Ray

Revenge isn’t so sweet in Jeremy Saulnier’s Blue Ruin, an unblinking look at a journey down the winding road to retribution and beyond. The writer-director organizes the ugliness in a subdued mood piece that entertains and provokes. This Coen-esque thriller communicates clearly without getting bogged down in over-explanation of character motivations or plot minutiae. We know who’s doing what and why – maybe not right away – but it’s more important that we’re engrossed in the grimy business of vengeance. Payback isn’t only a bitch for the target of retaliation, but for everyone involved, directly or on the periphery.

Haggard and homeless, Dwight Evans (Macon Blair) wanders an east coast beachside town foraging for food before retiring to his broken-down Pontiac Bonneville – a faded blue heap stalled between the dunes. One morning a kindly police officer tells Dwight simply, “He’s being released.” The “he” is Wade Cleland, a convicted murderer sent to prison for killing Dwight’s parents 20 years earlier. Dwight reconnects his car’s – and his own – battery and sets out to exact vigilante justice. To that aim, two decades of pent-up emotions are released in a relatively swift success, but this end doesn’t provide tidy closure. How could it? The backwoods Cleland clan isn’t the type to involve authorities in these matters. Dwight now has to maneuver through an escalating cycle of violence he’s woefully ill-prepared for, and reconnect with estranged sister Sam (Amy Hargreaves) to inform her that she and her young children are potential targets.

While Blue Ruin isn’t short on bloody payoffs, it’s more concerned with the nature of revenge and its byproducts. There are logical steps as the story progresses, but it never feels like Saulnier is just hitting necessary beats. There’s a practical heaviness on display that transcends the action. The largely wordless opening 20 minutes that establish Dwight as a lonely, forlorn soul set the tone of the film, and also set an appropriate baseline for his sideways evolution. Though he was destitute, Dwight was functional enough to live off the land and cunning enough to sneak into homes to bathe himself. Once he becomes an instrument of vengeance he loses his identity and his shortcomings are exposed. Even his sister, who is happy to see her brother after all these years, doesn’t hesitate to point out his ineptitude.

Saulnier also allows comedic foibles to bubble up without ever losing the feeling of bleak authenticity. Imagine how hard it would be to procure a gun with no resources, and the frustration that would set in when you steal one that has an unbreakable trigger lock. At one point a wounded Dwight gives self-surgery a try only to wind up worse off, forced to hobble to the hospital. In these scenes, and in all the more serious moments, Blair is able to capture the necessary emotion without relying on dialogue to tell Dwight’s story. There aren’t any flashbacks to fill in gaps, we’re always in the moment with him as he goes from adrift beach bum, to driven killer, to helpless prey in a game of brutal circumstance. The supporting cast is also solid, notably Devin Ratray who pops up as a hospitable old friend able to educate Dwight about firearms and bail him out of a sticky situation.

Quietly insightful, Blue Ruin plays into our primal urge for justice and isn’t afraid to show us the spiraling consequences, physical and emotional, that come with acting on those impulses. It doesn’t politicize, moralize, or pretend to have any answers. To do so would dull the tragedy; and while the film is gloomy, it’s definitely not dull. 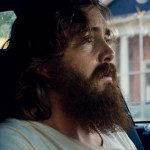 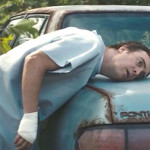 One thought on “Blue Ruin”