Cue old-timey prospector voice!
Buy It From Amazon
Buy It On DVD
Buy It On Blu-Ray

The urge to submerge has been part of our film legacy since the beginnings. From Frank Capra’s Submarine to such popcorn chewing films as Run Silent Run Deep, Hell and High Water, and The Hunt for Red October, men trapped together in a confined space underwater has been the basis of some of the best movie action and emotional conflict on screen. There is also the kick of hearing people like Clark Gable yelling, “Dive! Dive! Dive!” and the sheer nuttiness of watching a Cinemascope film shot completely inside a cramped submarine interior. Now with Kevin Macdonald’s Black Sea, starring Jude Law sporting a thick Scottish brogue, the submarine film has resurfaced.

Law plays a gnarly, grumpy bloke named Robinson, who, as the film begins, has just been fired from his job at a high-tech salvage company. At a local dump, Robinson and other recently fired sea dogs guzzle beer and complain about the 1%: “You are dog shit in this wonderful world without money.” Fired up with misery, one of Robinson’s colleagues, Kurston (Daniel Ryan), entices Robinson about a submerged Nazi U-Boat in the Crimea stuffed with millions of dollars in gold bars just sitting there waiting for a group of enterprising layabouts like themselves to pluck from the sea. All that is needed is a grizzled ex-submarine commander (Law, natch) to organize a crew, requisition a rusted old sub, and go down and get it. And since it is a Russian sub the boys plan to use, half the crew needs to be Russian.

Since we are now in heist film territory, it should take a bit of screen time for Robinson to get a crew together, but organizing this submarine crew appears easier than putting together a night shift at McDonald’s. Unfortunately, the crew of the sub are such a bunch of idiots that it is doubtful they would even be hired by McDonald’s except to take out the garbage. Prominent among them are the psychotic Fraser (Ben Mendelsohn), teenage innocent Tobin (Bobby Schofield), Russian nice guy Morosov (Grigoriy Dobrygin), and American corporate flunky Daniels (Scoot McNairy), who pisses everyone off by screaming protests like, “This wreck’s gonna sink,” “I’m claustrophobic,” and “We’re all going to die.”

Quickly, the crew gets the old sub operational and quickly the sub sinks in the water… along with the film.

When Robinson announces that all crew members will get an equal share of the gold and the crew realizes that the smaller the crew the bigger the split will be for each, they start eyeing each other like the cast of The Treasure of the Sierra Madre. Before the air inside the submarine can even be pressurized, all hell is breaking loose. The Russians (depicted in Black Sea in true Neanderthal, bullet-headed Cold War style as a bunch of sub-human louts) quickly clash with the Brits. In the blink of an eye there is a stabbing, the crankshaft explodes and a number of crewmembers meet a watery grave.

Robinson is no Sean Connery in The Hunt for Red October. Although commander of this operation, he prefers to sit in the dark and dream about the family that has left him (we know he loves them because there are slow motion flashbacks in bright sunny hues of a blonde woman frolicking on a beach with a young boy and Law’s eyes mist up). Robinson does manage to burn up a winning lottery ticket and smash the radio to set an example. He also issues aphorisms to the crew like, “This time the shit is fighting back.”

In this cacophony of clichés, Law tries to remain resolute. He does that by affixing steely stares down at the floor and furtively glancing behind him. I would too if I were him.

Black Sea wants to be relentless adventure about desperate men in desperate circumstances like The Wages of Fear or Sorcerer. But the film piles on a cacophony of cliches onto an unbelievable cast of characters. If these guys were cleaned up and the dumb get-the-gold story was thrown out, we would at least have the makings of a good remake of Down Periscope. 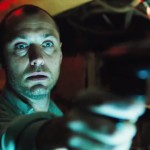 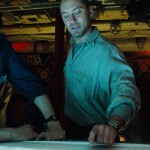