Shout to the Lord... literally.
Buy It From Amazon
Buy It On DVD
Buy It On Blu-Ray

Black Nativity is a movie made for a specific viewing demographic. It’s not necessarily for fans of the Langston Hughes play (it is, by admission, a “loose” adaptation at best), and it tacks on a tired narrative about the standard festive familial issues when the original’s gospel-tinged inspirations would have been so much better. Indeed, Kasi Lemmons’ use of the title may be the least ingenuous thing about this otherwise overly earnest tale. Between the new setup, the surprisingly “slightness” of the actual birth of the Savior, and the awful contemporary songs stuck into it, this is less a celebration of inclusiveness and universal love and more a narrowly pitched product preaching to an already established commercial niche.

In true Tyler Perry form, Lemmons creates a melodramatic plot involving a young boy named Langston Cobbs (Jacob Latimore) and his struggling single mom Naima (Jennifer Hudson). When the landlord serves them with an eviction notice, the kid is sent off to live in New York with grandparents he didn’t know he had — the Reverend (Forest Whitaker) and Mrs. Cobbs (Angela Bassett). At first, Langston is mad at his situation. Then he decides to help his mother out by getting a gun and getting some money. He approaches a pawn shop owner (Vondie Curtis-Hall) who calls him out on his actions. He then asks a street tough with a secret (Tyrese Gibson) for help. Eventually, the truth about Langston’s MIA dad is revealed, the good preacher and his wayward daughter reconnect, and everyone sings Stevie Wonder’s “As” while the final credits roll.

Oh yeah — for about five minutes, we get the traditional Nativity set within a surrealistic Times Square setting.

Since Jesus was a strong proponent of forgiveness, one has to give Lemmons and her attempt at modernizing Hughes’ shape-shifting holiday celebration a bit of personal pardon. It’s not the original, but then again, few religious congregations circa 2013 follow the work of the famed poet/activist/playwright to the letter. Instead, they open it up, changing the basic story and adding/subtracting songs and sentiments at will. The story was always meant to be this malleable, to change with the changing times. But one wonders if it was meant for this — a lifeless, illogical bit of hand-wringing that robs the piece of its joy, its heart, and its meaning.

Hughes wanted to give African Americans their own version of the moment when Christ was born. He wanted it to speak to those who society had marginalized and disenfranchised. Here, Lemmons loses all of that. Instead, we see a Man of God living large in Harlem, his well-festooned three story home in stark contrast to the homelessness facing his daughter and grandson. Too much time is spent with Langston looking angry, ready to explode at the very idea of not having a place to live or a mother to love. In fact, almost everyone in the film looks angry, as if their director told them to “act like someone is about to punch you in the face” — it’s a weird combination of ire and fear.

Listen, you can’t waste the amazing talents of Mary J. Blige and get away with it (she plays an angel, and gets one mediocre song… boo!). Then again, this film continues to prove that Jennifer Hudson’s Oscar was a major league fluke, as her performance here is all caterwauled stanzas and lifeless shouts. For their part, Whitaker and Bassett are somewhat believable, but the movie itself is mired in a kind of coolly detached design that leaves you wanting for more of the Holy Spirit and less vocal histrionics. We expect something timeless, not tired.

In the long line of films that preach to the converted, Black Nativity is an incredibly insular sermon. Instead of vital and uplifting, it’s loud and obnoxious. 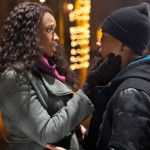 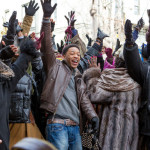 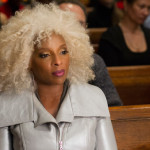