Am I too late for the Ghostbusters 3 auditions?
Buy It From Amazon
Buy It On DVD
Buy It On Blu-Ray

Disney’s latest collaboration with Marvel, an adaptation of Big Hero 6, easily earns the superlatives I’m about to bestow upon it. It’s visually engaging, solidly structured, offers up entertaining characters, and establishes the needs of the genre — the superhero film — without falling into the pitfalls facing the typical “origin” stories. By deviating from the comics and creating their own take on the “even geeks can be champions” theme, the filmmakers manage to make something that both fans will relate to and the uninitiated will adore.

Our story centers on Hiro (Ryan Potter), a science prodigy living in the futuristic town of San Fransokyo. He loves to compete in illegal robot fighting and adores his Aunt Cass (Maya Rudolph) and his big brother Tadashi (Daniel Henney). The latter is currently studying at the local college, under the tutelage of Professor Robert Callaghan (James Cromwell), and has developed a medical aide droid known as Baymax (Scott Adsit).

Along with buddies GoGo (Jamie Chung), Wasabi (Damon Wayans, Jr.), Honey Lemon (Genesis Rodriguez), and Fredzilla (T.J. Miller), the students hope to impress mysterious industrialist Alistair Krei (Alan Tudyk). Tadashi pushes Hiro to participate in the upcoming demonstration, and his invention (a mini mind-controlled robot) wins the day. Then a tragedy occurs, leaving our lead to fend for himself. Pairing up with Tadashi’s crew, Hiro tries to find out who’s responsible for the incident and why they’d want to steal his idea. The answer threatens all of San Fransokyo.

For all its action sequences and CG detail, Big Hero 6 actually exists to showcase the relationship between a hurting Hiro and his substitute caregiver, Baymax. Thanks to a limited programming protocol and our troubled teen’s desire to defend his family honor, we wind up with exciting moments melded with classic cartoon comedy. They are reminiscent of those moments in Terminator 2 when John Connor taught an otherwise murderous machine to become a kinder, gentler automaton. Directors Don Hall and Chris Williams wrap a lot of emotion into the byplay between the two, helping us understand what’s at stake and why we should care.

They also introduce a collection of compatriots that speak for a diversity and dimension many Marvel films technically don’t have… yet. Guardians of the Galaxy has a similar theme, but this group goes beyond the ragtag and rejected. Instead, they are all gifted in one way or another. They just need Hiro and his desire to uncover the evil simmering beneath the town’s surface to bring it out. Yet GoGo, Wasabi, Honey Lemon and Fred are not categorized by their abilities. In fact, they are often flustered by them. Big Hero 6 uses this dichotomy for laughs, as well as narratively necessary aims. We have to see our heroes struggle before they succeed, and this is partly why the movie works so well.

But it’s the eye candy that will keep the kiddies coming back, a dazzling array of intricate ideas strewn across an equally imaginative backdrop. San Fransokyo looks like the kind of place one could easily visit in real life, the level of detail is so exact. It also makes for an amazing backdrop, the 3D camera cruising over skyscrapers and in between motorways to provide the necessary adrenaline rush. By now, such a strategy is old hat, but somehow, Big Hero 6 makes it work. We want to see our newly formed gang together and trying out their various skills, and Hall and Williams give them a wonderful motion picture playground in which to explore.

As with most Marvel movies, the stage is now set for more adventures to come, and with its kid-friendly feel and adult-oriented entertainment value, we will definitely be seeing a lot more of Big Hero 6 in the future. Many may have doubted Disney when they decided to pursue a purchase of the comic book giant. This movie makes the transaction make ample sense. 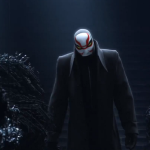 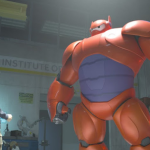 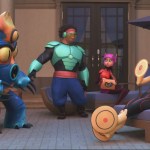 One thought on “Big Hero 6”