Beyond the Lights
By: Bill Gibron

Yes, fame comes with a price. The loss of privacy. The expectations of the audience. The stereotypical truisms of its fleeting nature and rollercoaster constants. But there is also a personal cost, one that transcends the trappings to instantly delight and then demonize its owner. In Gina Prince-Bythewood’s excellent Beyond the Lights, we learn that, yes, all that glitters is indeed not gold and that a life spent in the public eye can result in an antithetical combination of success and sadness. While celebrity burns bright, it can also scorch, and destroy.

Ever since she was a young girl, Noni Jean (Gugu Mbatha-Raw) seemed destined for greatness. While her haughty stage mother (Minnie Driver) won’t stand for second best — making a younger version of the future superstar throw away her runner-up trophy from an amateur talent competition — she longs to express herself and her obvious abilities. However, in the cutthroat world of modern R&B, Noni is reduced to a hyper-sexualized object and this drives her to attempt suicide. Luckily, a down-to-earth cop named Kaz (Nate Parker) comes to her rescue, and before long, they fall in love. This leads to complications as well, since his dad (Danny Glover) wants him to run for public office, and a politician doesn’t need a pop star on his arm.

There are further issues along the way, including Mom’s undeniable villainy, a white rapper ex-boyfriend named Kid Culprit (Machine Gun Kelly), and a lot of pushy public pronouncements. Yet thanks to the unquestionable chemistry between Parker and Mbatha-Raw, as well as the complex insights of writer/director Gina Prince-Bythewood (Love and Basketball), what could have been a ham-fisted soap opera turns into a delicate romantic drama. We get to know Noni and Kaz, champion their relationship, and worry when it looks like the rest of the world will try and find a way to pull them apart. Sure, those elements are obvious, cinematic givens so to speak, but when done well, they work.

You have to appreciate Prince-Bythewood’s approach here. She doesn’t just deal with the ins and outs of the relationship. There’s clever commentary mixed throughout Beyond the Lights, from Driver’s defiant single mother of a mixed race child (and the struggles raising same) to the horrific state of women in hip-hop circa 2014. When Kid Culprit “gets back” at Noni in public, it’s an act so demeaning that it’s disturbing. But as we’ve seen before, and as we will revisit again, such assaults are part of the “game.” Similarly, the status of minorities in politics is broached, as are issues about persona and public image. All of this turns the film into an intriguing experience. On the one hand we root for our leads. On the other, we worry about the social stigmas being callously attached to them.

Even better, Prince-Bythewood shows us that women, and women of color, can legitimately lock horns with Hollywood’s patriarchal positions and come out on top. Granted, she does so in a way that’s both familiar and fascinating, with just enough stereotyping and corn to keep the old school set interested, but what she accomplishes is to be admired. The acting is uniformly excellent, with Driver and Glover showing the younger folks how it’s done. Ms. Mbatha-Raw is the real stand-out, however, effectively playing the post-modern music artist diva designs with enough self-awareness and vulnerability to keep our interest. She even does her own singing (including a take on Nina Simone’s “Blackbird”) which adds to the authenticity.

For some, a romance without silly slapstick, an ironic best friend, and numerous pop culture references that were stale when George W. Bush was entering the White House is as foreign as a feast of falafel. Hollywood has spoon-fed them such unrealistic nonsense. In Beyond the Lights, Gina Prince-Bythewood finds the truth inside the trappings of celebrity, and creates a winning window for us to look through. 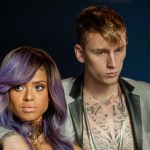 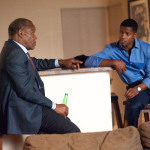 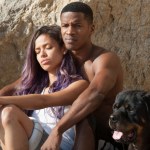 One thought on “Beyond the Lights”