Battle of the Year 3D
By: Bill Gibron

Let's twerk it, boys!
Buy It From Amazon
Buy It On DVD
Buy It On Blu-Ray

The modern musical is no longer a fanciful experience where characters consider their situation or lament/celebrate their circumstances via song. Instead, they’re nothing more than souped up music videos, the remnants of the MTV generation spilling over into the obviously antiquated showtune format. Today, well-honed and toned bodies gyrate as the latest rap-flavored mix fills the soundtrack, impossible shots (and a prevalent use of 3D and other gimmickry) turning the entire production into a slick bit of cinematic salesmanship. The story is secondary to these set-pieces, a cobbled together collection of cliches that highlight the flaws in such a film. Instead of focusing on something unnecessary, like a narrative, why not simply hire the best dancers in the entire world, set them up in front of a camera, and let them do their thing?

This was the approach taken by director Benson Lee when he decided to highlight the annual competition among B-boys and B-girls known as The Battle of the Year. Planet B-boy followed five different crews as they practiced their break dancing moves as part of the international contest and featured some filler in between the popping and locking, but for the most part, the documentary highlighted the style and skill of the various groups and their affinity for the hip hop-influenced form. Now, Lee is back with a fictional film named after the Battle, and it is beyond bland. Instead of infusing this film with more character and conflict, the filmmaker reverts back to the standard Step Up strategies: find a group of archetypes, make them underdogs within the talent they’ve mastered, and manipulate the audience into thinking they have no chance at winning. Then, they win.

In the case of the American crew featured, we meet a music impresario named Dante (Laz Alonzo) who is angry that the USA hasn’t won the BOTY recently. Instead, the Asians and the Europeans dominate, and our mogul won’t stand for it. So he hires alcoholic basketball coach Derrek (Josh Holloway) to bring together a group of divergent street dancers, including a pair of rivals (Chris Brown, John Cruz), a homophobe (Sawandi Wilson) and the token homosexual (Richard Maguire), as well as nine other nobodies, with orders to whip them into a team of flag-waving warriors. Along with his joke-spewing sidekick (Josh Peck) and a female choreographer (Caity Lotz), Derrek must conquer his own demons as well as the differing personalities of his participants to bring the Red, White, and Blue back to the BOTY top.

Imagine Rocky featuring a dozen Balboas as pseudo Boogaloo Shrimps and you’ve got some idea of where Battle of the Year is going. While the 3D accents to the dancing are engaging and often mesmerizing, getting to the good stuff is one incredibly long and painful haul. As Holloway hacks his way through the entire stereotypical coach’s handbook (this is a movie where they actually say moldy old maxims like “There’s no ‘I’ in team”) and struggles with the sauce, our cast compliments his truisms by being equally predictable. They fight. They crack wise. They have their moments of doubt. Then they step out onto the floor and transform into high-flying, head-spinning dervishes. Lee does a terrific job of capturing the competition, of showing us the otherwise subjective reasons one group is better than the other. On the other hand, he’s so ham-fisted when it comes to the “drama” that we feel lucky to have someone like Peck, standing on the sidelines, adding his ethnic-flavored quips.

Battle of the Year is so familiar that you half expect Julia Stiles and Channing Tatum to show up and start hoofing. Benson Lee already explored this material, effectively with his fascinating documentary. As fiction, it’s frontin’. 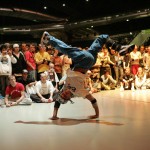 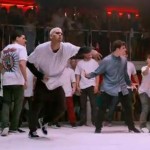 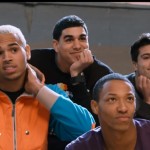