Bad decision.
Buy It From Amazon
Buy It On DVD
Buy It On Blu-Ray

There are several bad words that could be used to describe Bad Words. Since most of the ones used in the movie aren’t fit to print here, let’s go with uninspired, humorless, belabored, pointless, monotonous, and irritating – for starters. As soon as the novelty of seeing an abrasive 40-year-old man-child compete against fifth graders in a spelling bee wears off (which happens very quickly), we’re left with a stale comedy that tries desperately to be filthy and poignant at the same time. It’s partly successful, I suppose, because while it is filthy, it’s just not funny. And it’s definitely not poignant.

Guy Trilby (Jason Bateman, who also makes his directorial debut here) weasels his way into a spelling competition that is open to kids who haven’t yet passed eighth grade. Since Guy never attended high school, he’s in. Using his phenomenal spelling skills, he breezes through a regional competition and qualifies for the national finals of the Golden Quill. There, he’s pitted against preteen prodigies, including the chipper Indian-American Chaitanya (Rohan Chand), who responds to Guy’s pointed barbs with naive cheer. Embedded on the journey is Jenny (Kathryn Hahn), a reporter who tries to uncover the real reasons behind the misanthrope’s quest for spelling immortality. Along the way Guy forges an uncomfortable kinship with Chaitanya, mercilessly bullies his opponents into submission, and tries to avoid the landmines tossed out by Golden Quill officials (Philip Baker Hall and Allison Janney), before revealing the purpose behind his antics.

If you think you can guess Guy’s motive about halfway through Bad Words, you’re probably not alone. And the transparency belies his mean-spirited actions. There’s nothing inherently wrong with despicable characters – another “bad” movie, Bad Santa, did it right – but here we’re genuinely supposed to sympathize with Guy due to his unhappy upbringing one minute, and then laugh at his ridicule of 11-year-olds the next. He’s aiming his scorn in the wrong direction and it feels unpleasant without the exuberance. Sure, it’s hilarious once or twice when you call an Indian child “Slumdog” or tell him to shut his curry hole, but by the tenth or eleventh time it goes beyond the bounds of palatability and, perhaps more importantly, good comedy.

Bateman brings his signature smugness to the lead role, and the arid delivery is dull instead of shocking, a trait that extends to his flat direction. Hahn is grossly underutilized in her role, but despite not having much to do she gets the film’s two most genuine laughs – one yelling out during a sex scene and the other fending off the advances of a private investigator. Poor little Rohan Chand shows he has a knack for comedic timing, but his earnest youngster is lost in an aimless arc that mixes abandonment issues and a sad history of bullying with an awkward association with Bateman’s malcontent. It’s a friendship that alternates from wild nights on the town with booze and other debauchery to grossly adversarial and contentious for the sake of sad attempts at humor.

Wrapping up all the hate in a cute little bow, the resolution of Bad Words treats Guy’s non-revelatory objective as if it were profound catharsis rather than the shallow stir it really is. Without giving proper context, the denouement is just a matter of cheap necessity. An additional heaping of saccharine feels like a cop out to counterbalance the vulgarity that came before. I’m not sure if we’re supposed to be insulted or amused after Bad Words, but either would at least be something. All we’re left with is a detachment as acute as the main character’s. 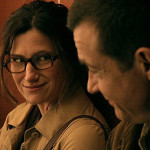 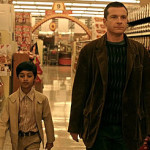 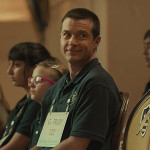