The Babadook
By: Blake Crane

I dunno, what's a babadook with you?
Buy It From Amazon
Buy It On DVD
Buy It On Blu-Ray

In the tradition of many horror classics, The Babadook prefers to raise the hairs on the back of your neck rather than make you leap from your chair. Though there are a few jumpy moments and no shortage of genre conventions, director Jennifer Kent’s feature debut validates the notion that the monster lurking in the shadows is only as scary as the meaning we ascribe to it. But it also doesn’t hurt if said monster has a round, pale face that hovers between a black top hat and overcoat, long spiky fingers, and a mournful squawk that makes Danny Torrance’s “redrum” refrain sound like a pleasantry.

Amelia (Essie Davis) is haunted (in the emotional sense) by the death of her husband, killed in a car crash while rushing her to the hospital to give birth. It’s been nearly seven years since the accident and Amelia struggles through sleepless nights and the minefield that is raising her maladjusted son Samuel (Noah Wiseman). Their bedtime ritual includes making sure no monsters are in his closet and reading a story, before he inevitably ends up in his mom’s bed grinding his teeth. One night a mysterious red-bound book entitled Mister Babadook appears on the shelf and Samuel insists his mother read it. After only a few pages, Samuel’s huddled in the fetal position and bawling. The disturbing popups and sketches portray a creepy figure, mention three knocks, and warn that once you let the Babadook in you can never get rid of him.

Samuel lets the monster in – to his mind, anyway. He becomes more attached to the homemade weapons that got him booted from school. His behavior becomes harder and harder for Amelia to tolerate or explain away. When he’s paralyzed with fear by a vision (unseen by us or anyone else onscreen), Amelia’s immediate response isn’t one of empathy, but a pained exclamation, “Why can’t you just be normal?!”

This increasingly antagonistic mother-son relationship forms the basis of the film’s simmering terror. Though a variety of supporting players are woven into the fabric of the story, this is a two-person show – one that Davis and Wiseman brilliantly carry. Wiseman isn’t the standard-issue 21st century horror kid. There are no blank stares into the camera from black eyes; only plainly stated assertions that the monster is real and a seemingly endless cacophony of attention-seeking. Davis’s journey from exhausted mother to tormented soul is filled with a subtlety that helps justify the third act extremes.

She hears the three knocks. She attempts to destroy the cursed book, but it reappears on her doorstep, complete with new, even more disturbing pictures and more foreboding nursery rhymes. By the time the titular menace appears slithering along the ceiling, we believe it could be real or that Amelia is unhinged enough to be an unreliable window into the metaphysical. The presentation of Babadook as a stop motion specter that would look right at home in a 1900s nickelodeon further blurs the line separating perceptible ghost and mental projection. It also just looks cool. As does the grey color palette of the family home that allows for varying interplays of shadow and light that define the chilling cinematography.

Kent does a masterful job of joining visions of the villain with a wife’s unmanageable grief and a mother’s uncontainable resentment. The battle that rages isn’t only with the visible manifestation of the ghoul, but with the sentiment that conjured it. Lesser horror movies would get caught up in elaborate backstories and explanations; The Babadook uses intrinsic, in-the-moment anxiety to tell us everything we need to know. It’s not immune to some recent staples – the puking up of a black viscous liquid, characters being pulled away from the camera by an unseen force – but it all fits within an even tone that harkens back to Rosemary’s Baby or Repulsion, with dread that mounts as psyches deteriorate.

With The Babadook, Kent has created an iconic boogeyman and an intense psychological horror film that cuts to the core of actual human grief and tragedy by way of the fantastic. Real or imagined. 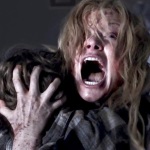 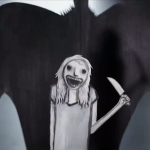 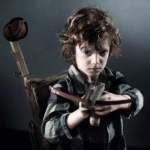