The Autopsy of Jane Doe
By: Blake Crane

She was incredibly flat.
Buy It From Amazon
Buy It On DVD
Buy It On Blu-Ray

Making his English language debut with The Autopsy of Jane Doe, Norwegian director André Øvredal delivers a precise examination and deconstruction of horror convention. Much like the father/son coroners performing the obligatory postmortem, Øvredal strips away layers and pieces to get to the truth. The film is creepy, grotesque, and has a fundamental understanding of what makes a horror story genuinely compelling.

The macabre nature of the story co-exists with two strong lead performances that provide charm and sincerity. Though the film may be too technical for its own good at times and seems to make up some rules as it goes along, the tight pacing and the actors make the fright feel credible.

We open at a bloody crime scene with the familiar genre sounds of a camera documenting the carnage. Contrasting the gore is a naked, half-buried, seemingly pristine body of an unknown young woman. Authorities take the deceased Jane Doe to the local mortuary run by Tommy Tilden (Brian Cox) and his son Austin (Emile Hirsch). The duo promises to work through the night for the local sheriff (Michael McElhatton) and find the cause of death. The deeper they get into the examination, the more complex – and dangerous – the mystery becomes.

Cox and Hirsch establish an authentic familial and co-worker dynamic from the start. As they finish up their work on a man who was burned, Tommy asks his son questions that urge critical thinking. He’s casually nurturing when pointing out mistakes and Austin is receptive to instruction. Their conversations feel real and they don’t play heightened stereotypes with forced conflict to create false tension. Refreshingly, their relationship helps keep the movie centered when things start to get weird. And things get really, really weird.

Though Jane looks pristine on the outside, internally she’s a wreck. Her tongue’s been cut out and there are other signs of torture. The questions of who did this and why hold our interest as Cox furrows his brow, studies new discoveries, and consults textbooks. That the Bible becomes a reference probably isn’t good. Hirsch is our surrogate, eager but a little bewildered and anxious.

Øvredal establishes the progression from routine to supernatural proficiently in the first two acts. The family business is established as closed off with limited means of egress. One of the freezer doors has a tendency of popping open. Tommy tells Austin’s girlfriend Emma (Ophelia Lovibond) why a bell is tied to a corpse’s toe, which sets up a sound to fear later. As Jane starts to reveal her secrets and danger presents itself, crosscutting between the eerie happenings and her body on the slab urge us to study for clues and anticipate potential shocks. Even if the body (played perfectly stilly by Olwen Kelly) only moves when manipulated by the coroners, there’s the illusion that threats could become manifest.

When things go fully bonkers, there are several organic scares, but they’re intermingled with some illogical frenzy and a few cheats. A radio provides some on-the-nose commentary and the someone or something turning the mortuary into a house of horrors has timely control over lighting, door locks, and anything else needed to work the ordeal into resolving.

Some final act convenience aside, The Autopsy of Jane Doe is a crafty undertaking that balances mystery with panic. It’s also sophisticated with some underlying commentary on systemic abuse, offering some depth to go along with the viscera. 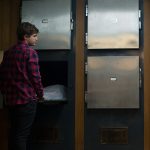 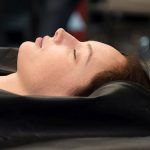 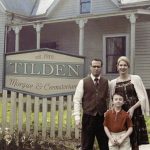 One thought on “The Autopsy of Jane Doe”