As Above, So Below movie review » Film Racket Movie Reviews

As Above, So Below
By: Bill Gibron

I haven't found any footage. Have you?
Buy It From Amazon
Buy It On DVD
Buy It On Blu-Ray

You know the phrase “Hell on Earth.” Apparently, it’s a misprint. In reality, Hades takes up residence in the catacombs beneath Paris, or so the new found footage fright falderal known as As Above, So Below would have us believe. This tomb-raiding Croft crap is set up as a spelunking civilization adventure, complete with a Ms. Indiana Jones clone and a mythic ancient relic. It ends up being a psychological struggle, each participant’s personal demons getting a literal airing out once we find ourselves in the aforementioned famed French tombs. It will take a strong stomach (thanks to the wobbly shaky cam POV perspective utilized) and an even better developed suspension of disbelief however to buy this late summer swill. It’s pointless and pondering.

Our cave diving gal is Scarlett Marlowe (Perdita Weeks), the daughter of a famed archeologist. When her father commits suicide, she decides to take up his quest to look for the famed philosopher’s stone (a talisman that can turn any metal into gold). Convinced the item exists in the famed catacombs of Paris, she gathers together a group of likeminded individuals, including guide Papillon (François Civil) — who brings along his girlfriend Souxie (Marion Lambert), and best friend, Zed (Ali Marhyar) — documentarian Benji (Edwin Hodge), and former colleague George (Ben Feldman). As they go deeper and deeper into the celebrated collection of skeletal remains, they come across areas formerly unexplored. They also begin to experience events — and entities — that reflect their own inner fears.

Had it scuttled the Go-Pro propensities and simply told a story of six people trapped beneath the streets of the City of Light, As Above, So Below might have worked. It could offer up standard scare material like claustrophobia and physical restriction/no escape and allowed us to create our own “you are there” personal prison. Instead, the Dowdles — director/co-writer John Erick and brother/co-writer Drew — rely on the cinematic approach that made them cult creepshow names (the [REC] remake Quarantine, The Poughkeepsie Tapes), beating this long dead Blair Witch nag into the groan-inducing ground.

Even better, had they done away with the fright nightmares and simply used the first person POV as part of a Raiders rip-off, we’d probably buy that too. An action movie told via such a gimmick would be interesting. A horror film is yesterday’s news. Even with critics and audiences begging for a moratorium on this DOA dynamic, there are probably ways to make the found footage film exciting again. The Dowdles don’t do anything to inspire our interest. Instead, it’s all queasy quick takes and partially glimpsed paranormals. And since we don’t care about Scarlett or her quest, nor identify with anyone around her, their materialized memories play as hollow and humdrum.

Like The Descent, which milked legitimate dread out of being trapped underground with a bunch of albino cannibals, we are supposed to respond, at least initially, to the situation before getting lost in the subtext. But because things are laid out in such a staid, set pattern (opening events in Iran, followed by the trip to France, and the catacombs) there’s nothing new or novel. The Dowdles also take too long to get to the good stuff. Like Paranormal Activity, which mined similar terror-tory for very limited returns, we have to suffer through endless conversations (“What’s THAT?” “Did you SEE that?”) and sonic “shocks” before anything is actually shown. Once the spookshow starts, the whirling dervish nature of the cinematography destroys the atmosphere.

You have to give credit to the film in one slight capacity. It somehow managed to convince the French government to let a film crew down into the depths of one of its most famed funereal locales. Sadly, the story they came up with can’t match the natural curiosity of the catacombs. Once underground, As Above, So Below should have stayed buried along with the rest of the lifeless masses. 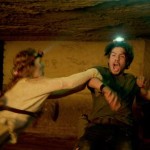 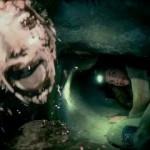 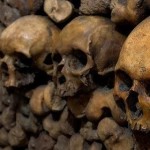 One thought on “As Above, So Below”