The Art of the Steal
By: Blake Crane

Artful Dodgers.
Buy It From Amazon
Buy It On DVD
Buy It On Blu-Ray

Regardless of what’s being stolen or who’s stealing it, caper films typically tread a well-worn path, and The Art of the Steal is no different. Though an opening voiceover dismisses the “one last job” cliché, this lighthearted mix of Ocean’s 11 and early Guy Ritchie comes complete with rhythmic banter between colorful characters, an overly-elaborate ruse, and a variety of locations and accents. There’s also the requisite lifting of the curtain, which is where The Art of the Steal falls flat. The final act suffers from revisionist history syndrome, taking us back in time to crucial points in the story to show us, in no uncertain terms, “This is what really happened.” Explanations are blunt, dulling the snap of the scheming antics performed by a talented cast.

Crunch Calhoun (Kurt Russell) is the accomplished driver in his crew of thieves, which includes his smooth-talking half-brother Nicky (Matt Dillon), art forger Guy (Chris Diamantopoulos), and elder statesman Uncle Paddy (Kenneth Welsh). When a robbery goes wrong, Nicky is captured and gives up his brother as the fall guy. Crunch emerges from a Polish prison as a shell of himself, grabbing work as a daredevil in a traveling carnival and wiping out on purpose if it means a few extra bucks. Soon the team is brought back together for the proverbial score of a lifetime – stealing a historic book and smuggling it into the United States from Canada. Crunch loops in his dependable assistant Francie (Jay Baruchel) and attempts to exercise control over the situation, but Nicky seems to have his own agenda. Complicating everyone’s plans is a gauche Interpol agent (Jason Jones), who hopes to use his captive informant (Terence Stamp) to nab the crooks.

Writer/director Jonathan Sobol, who shot much of the film in his native Niagara Falls, embraces the tropes of the genre and includes several winks. It’s probably not a coincidence that the names of Ocean’s stars Brad Pitt and George Clooney appear on a sign for a wax museum in the background of a street scene. Sobol is fully aware he isn’t reinventing the wheel here and is just having fun rapidly maneuvering though the machinations while displaying a cheerful appreciation for these types of stories. Crunch often quotes famous historical figures, and there’s even a narrated silent-film sequence depicting the theft of the Mona Lisa. This affinity for art, stories, and storytelling is often fun, but also occasionally feels like an overeager grasp for style as the film searches for an offbeat pace to match its jazzy score.

The cast does a fine job of selling the silliness, most notably Russell and Baruchel as the old guy getting back in the game and the young guy getting in for the first time, respectively. Russell looks and talks like the weathered rascal he is, while Baruchel’s twitchiness is a consistent source of humor. His nervous interactions with a border crossing agent that reference a musical based on the film Witness and his affinity for Predator 2 are a highlight. If there were more time spent on similarly fleshing out other characters instead of just fussing over how everyone fits into the plot, there could’ve been a lot more fun to be had.

Even though there’s a narrow focus on the planning and execution of this heist, the universe built around it feels unnecessarily large. Stamp’s character could’ve been interesting if he had more to do, but he’s superfluous and adds little in the grand scheme. Similarly, Crunch’s wife Lola (Katheryn Winnick) is only used as a story convenience to help tie up some of the twists and turns. It’s that intricate plotting that stalls The Art of the Steal as it attempts to stick the landing. Sobol feels the need to over-explain when the film would be better served by riding its good humor to an end that wasn’t so concerned with clever payoff. 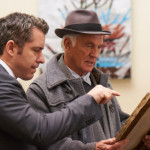 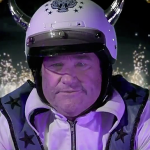 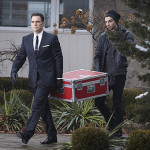