Arnold Isn’t a Bankable Star Anymore. Here’s How He Can Make a Comeback
By: Matthew O'Connell

Dead or alive you're going with him.

It’s official: Arnold Schwarzenegger is no longer a box office draw. Every theatrical release he’s headlined since his post-Governator re-emergence into cinema has been a box office flop. The failure of his latest film, Sabotage, is the clincher.

I’m as disappointed as you are; not only in the lack of reception for this iconic action hero, but also in the lackluster films he’s produced since his return to full-time acting. I waited out the whole Governor thing with high hopes for an Arnold renaissance. Instead, we’re still toiling in the Arnold dark ages. The only thing that can save us from more of this, and save Arnold from himself, is a total, strategic reinvention of his movie persona. And I believe that’s possible if we locate the problem and attack it head-on, Commando-style.

The ’80s and ’90s were loaded with successful, reliable blockbusters headlined by Arnold: Predator, Total Recall, T2, to name a few. The streak peaked with True Lies in ‘95, and tapered off with Eraser in ‘96. The mid-’90s was a good time for action movies; also the glory days of beloved Bruckheimer blockbusters like Bad Boys, The Rock, and Con Air. It all came crashing down in 1999: the year when the action genre as we knew it died. Arnold’s next three action flicks, End of Days (1999), The 6th Day (2000), and Collateral Damage (2002), were critical and financial flops. 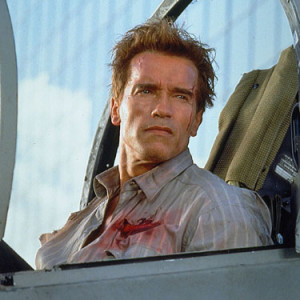 So, what changed in the late ’90s that made moviegoers suddenly too good for the tongue-in-cheek Arnold Archetype, and the entire action genre, such as it was? It didn’t help that Arnold contributed to the Flanderization of his image with Jingle All the Way and Batman & Robin, but that didn’t seal his fate. For the final nail in the coffin, why not blame every fanboy’s favorite punching bag: George Lucas.

Star Wars Episode I: The Phantom Menace was the highest grossing film of 1999. Prior to that, many original, unproven movies of various genres topped the box office in their respective years: Saving Private Ryan in ‘98, Titanic in ‘97, Independence Day in ‘96, preceded by Toy Story and Forrest Gump. Since Episode I, though, every top-grossing movie of each year has been either an adaption or sequel aimed at teens, with the lonely exception of Avatar in 2009. (Of course, Lucas isn’t solely responsible for the studios’ current reliance on a minimal amount of low-risk tent-pole franchises for the majority of their profits, but the Star Wars prequels embody the trend: Despite audience outcry and lukewarm critical reception, their legacy carried them to massive profits.)

Arnold had, to his credit, tried to avoid sequels for years. After the failure of Conan the Destroyer (1984), he declined second installments of Commando, Predator, and True Lies, among others, opting only to continue the Terminator series. After Conan, he learned a lesson: focus on the content, not the franchise. And now, after a few misguided, sub-par, formula actioners (The Last Stand, Escape Plan) that failed at exploiting Archetype Arnold for box office bang, let’s look at his revised slate of upcoming films: Triplets (a sequel to Twins), The Expendables 3, and — wait for it — another Conan movie. He unlearned the lesson. Hard.

Arnold is trying to relive his glory days in the most literal way possible, while catering to frugal studios that will only spend their money on a continuation of something they’ve already spent their money on, whether that’s an established franchise or the familiar Arnold brand. It won’t work. Arnold’s cinematic prime was 20 years ago; movies and audiences are different now. You can’t just transplant a relic into another time and expect success, regardless of whether it’s a one-off action flick or a long-delayed sequel. These poorly conceived movies are just diluting his legacy and affirming his transformation into an antiquated novelty.

Right now, Arnold is in danger of becoming the legendary Wild West gunfighter who spends his twilight years doing parlor tricks for fat tourists in a traveling circus. So are we doomed to stand by, cringing in discomfort, clinging to our nostalgia, as the studios squeeze every last bit of juice out of him that they can before he becomes a washed-up, wrung-out lemon? Nobody wants to see that happen. Not to John Matrix. Not to Harry Tasker. Arnold deserves a better denouement. If he has any chance at reclaiming audiences and retaining his dignity, he should discover who he is now — not harp on who he was 20 years ago. The Arnold Archetype may be dead, but Arnold the man lives on.

“Deserve’s got nothin’ to do with it.”

He needs his Unforgiven: a graceful, artistic, perceptive transition into a new era. It should reflect the arc that he has had as a person, show the growth he’s had as an artist, and acknowledge the evolution of audiences and art that happened in the meantime. He should set aside the formula that’s suffocating his brand and boring his fans, and reinvent himself. He should tell the story of 67-year-old Arnold, because that’s what he is, no matter how hard he tries to deny it. I want to see a self-referential effort that acknowledges his role in cinema history and introduces his role in cinema future, ushering in an adapted, more mature, more honest persona.

Let’s confront his slow decline into obsolescence with a swift reboot to the jaw. Let’s encourage the old Arnold to die not with a whimper, but with a triumphant bang, heralded by a new, evolved one. Let’s develop Arnold 2.0 within a more serious, complex, authentic, thematic action genre. Cut back on the one-liners, expand the character development. Lower his fists long enough to let his guard down and bite into some real emotional conflict. He’s got the chops.

As I see it, that’s the way to salvage this sinking ship. As a proud, lifelong fan, I’m rooting for a full recovery. And I’ll continue to greet every new Arnold flick with open arms and an open mind. Except for Triplets. I just don’t think I can put myself through that.