April and the Extraordinary World
By: Norm Schrager

I see London, I see France...
Buy It From Amazon
Buy It On DVD
Buy It On Blu-Ray

The ingenious, animated French film April and the Extraordinary World is what every adventure movie should be, an exciting journey with intelligent, creative surprises at nearly every turn. Adapted from work by graphic novelist Jacques Tardi, April combines alt-universe sci-fi, world history, and a fascinating collection of low-fi technology. It’s a steampunk fantasy minus the punk.

The concept is nothing short of thrilling. A botched attempt to create an invincibility serum for soldiers diverts the timeline of reality, resulting in a Napoleon-led empire devoid of modern invention. In the 1940s, the world’s population is unknowingly stuck with primitive machinery, and an environment suffering from constantly burning coal, one of the few sources of energy. The planet’s great scientists have been missing for decades. Wars are fought over forests. (Europe’s last remaining oak tree sits in a memorial of sorts, just one gorgeous narrative touch in a movie that’s full of them.)

At the center of the action is April (Marion Cotillard), a plucky young woman whose parents were scientists believed to have perished during April’s youth. Their secretive work on the serum left April an orphan, an unknown legacy, and a talking cat named Darwin (Philippe Katerine). April discovers that her grandfather (Jean Rochefort), a participant in the experiments, is still alive and ready to combat the evil empire working to keep all human progress to itself.

April experiences a world full of unearthed treasures, and so do we, creating a bond between audience and lead character that goes beyond the standard construct of rooting for the underdog. As April makes major discoveries about her life, we’re uncovering the odd wonders of her world – things that seem familiar at first reveal themselves to be slightly twisted (Note: The literal translation of the film’s French title is April and the Twisted World, and it’s equally appropriate as the “official” English title.)

What appears to be an early 20th-century train station is actually a depot for huge transport vehicles that move along clunky gears at the top of the dangling cars. Travel time from Paris to Berlin? 82 speedy hours. These small steps in a stunted industrial revolution are standard for everyone in the film, but both sad and magical for us. Directors Christian Desmares and Franck Ekinci are very sharp at sharing small tastes before moving on to wide shots – and bigger setpieces – that tell a bigger story.

While April and the Extraordinary World has a tame PG rating, that classification doesn’t really align with the PG you’d expect from an animated Disney film. The subject matter is more challenging and the tone grittier than, say, Inside Out and won’t have the kind of appeal for younger kids of shiny, hyper-polished animated features. (Not to mention the subtitles, but I’m assuming a dubbed version will also be available.)

Those youngsters who do give April a try with mom and dad will be richly rewarded. Not just with walking houses, spying rats and talking reptiles, but with an understated approach to animation – a film that’s a not-too-distant cousin to the works of Miyazaki, a master who Tardi mentions as an influence along with the late, groundbreaking animator Karel Zeman.

The true magic to April and the Extraordinary World is that it has an endgame worthy of its ambition. Not your typical closing overhead shot of a happy family but something bigger, a nod to the potential of humanity. For a film with the simplest of machinery and vehicles, April sure does fire on all cylinders. 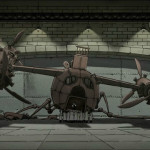 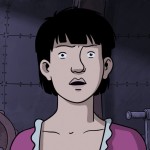 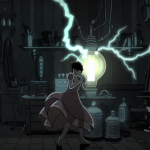 One thought on “April and the Extraordinary World”