A scientist tests the boundaries of existence only to question her sanity in Anti Matter, a smart low-budget science-fiction film that layers philosophical questions within its spooky premise.

Now available for streaming on Amazon Video, the film might remind viewers of Flatliners (both the 1990 original and its remake, out Sept. 29), given students experimenting with jerry-rigged equipment on the sly. But instead of probing whether an afterlife exists, Ana (Yaiza Figueroa), a PhD candidate in chemical engineering at Oxford, bends space and time itself. Researching the effects of electromagnetic pulses, she inadvertently creates a wormhole that first sends electrons and tiny items into who knows where. With aspiring boyfriend Nathan (Tom Barber-Duffy) and a hacker, Liv (Philippa Carson), Ana adjusts her calculations and soon is phasing coins, a Rubik’s cube, and more from one point to another.

The special effects are simple, which suits the weighty matters on the story’s mind. The three are ecstatic about what to do with this tech as they send living matter—plants, mice, and rabbits—through their wormhole while other students outside protest against animal testing. Forget grocery shopping; food could zip literally from farm to table. Water could be zapped to people in need. People could teleport to work, the beach, the mountains. Or maybe into a bank vault and escape before anyone’s the wiser.

Ana goes through the machine herself to doubly wow potential investors. The experiment seems to go well until she starts seeing things, fragments of dreams. Nathan and Liz seem overly secretive, then falsely cheery. The protesters appear ominous. She can’t seem to remember anything short-term and makes lists in a notebook, then can’t remember what prompted the notes.

Figueroa’s dark, expressive eyes invite compassion for Ana, a Hispanic American whose mother (Yolanda Vazquez) in Florida is packing to move a house full of memories after her father has died. He suffered from Alzheimer’s disease, and Mama doesn’t like what she hears in her daughter’s voice as Ana can’t remember calling her more than once a day. In between, Ana wonders if she’s losing her mind, or if she lost another part of herself. Do memories have weight? Does a soul?

Viewers might not be entirely satisfied with the answers in the somewhat ambiguous ending, but Anti Matter deserves kudos for asking the questions. 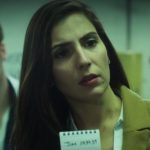 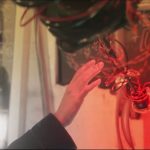