Who you calling dollface?
Buy It From Amazon
Buy It On Blu-Ray

In their ever-present and desperate attempt to turn everything into a cinematic universe, Warner Bros. is banking on James Wan and his creepy Conjuring films to bring in big box office. And why not? The first managed a mind-boggling $318 million on a $20 million budget, and the sequel raked in the same on $40 million, so the studio started greenlighting entry after entry in the series. With The Conjuring Part 3 in the works, we’ll also see films about The Crocked Man, and also involving that demonic Nun. But first out of the gate was the evil doll Annabelle, a toy so malevolent that ghost hunters Ed and Lorraine Warren (played by Patrick Wilson and Vera Farminga) keep it locked up from the world.

While 2014’s stand alone Annabelle wasn’t awful, it sure didn’t live up to the high horror standards that Wan created. He’s a master. John R. Leonetti, the cinematographer from the first film, getting his first shot at directing, clearly is not. So the suits brought on Swedish fright master David F. Sandberg who helmed the Wan-produced hit Lights Out. They were hoping for another dose of diabolic dread. They got it, and much more. Unfortunately, the subtitle “Creation” let’s us know that we are walking into the same dangerous territory as the first entry: the prequel.

As for the mythology, we learn that Annabelle is the name of the dead daughter of toymaker Samuel Mullins (Anthony LaPaglia) and his wife (Miranda Otto). In order to make up for the loss, the couple invites a nun (Stephanie Sigman) and a bunch of orphans, including a little disabled girl (Talitha Bateman) to come and live with them. Naturally, they are told to avoid the locked room in the house. They also find out that something doesn’t want them playing with Annabelle’s belongings. From there on, it’s a game of creepy cat and mouse as something targets the newest members of the household, and it’s not going to be nice about it.

For most horror films, the basic story isn’t that important. A camp counselor watches her son Jason drown, and decides to get revenge on the “kids” who were supposed to be protecting him. A disturbed boy named Michael Myers escapes from a mental institution and returns to his hometown to stalk and kill his sister. In the case of Annabelle: Creation, we have the bereaved parents and a child who won’t stay dead. That’s it. But thanks to the skill Sandberg shows in creating mood and atmosphere, we don’t care. We sit on the edge of our seat during every suspense sequence, and jump out of them when the stock shocks occur. We get lost in the atmosphere, and that’s what saves this otherwise standard exercise in technical terror. It’s all macabre mood and it’s magical.

You can see why Wan would want to explore these potential Warren files’ offshoots. In the right hands, they can deliver the kind of nail-biting delights the horror legions demand. But Annabelle: Creation fails to fully get under your skin. It doesn’t stay with you for days (or more importantly, nights) like the Conjuring efforts. But that doesn’t mean it won’t give you a good case of the shivers. As stories go, we’ve seen it before. But thanks to the skill set of the man behind the camera, and the producer who put them there, the ordinary becomes the ominous. Annabelle: Creation is a quality fright flick. 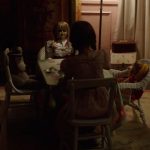 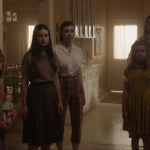 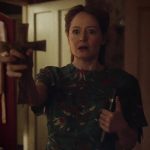