The Amazing Spider-Man 2
By: Bill Gibron

Time for IKEA.
Buy It From Amazon
Buy It On DVD
Buy It On Blu-Ray

Sony’s desire to reboot the already popular Spider-Man franchise was the result of fear. It was afraid of where Sam Raimi was taking the comic book series, and it was afraid that the character would become buried by the competition coming from brand companion Marvel and its well-honed movie universe. So hiring Marc Webb (of (500) Days of Summer fame) and allowing him to treat the material with more teen comedy pizzazz, the studio found a way to assuage its anxiety and keep the character viable.

The only real problem? The Avengers, which became a billion dollar juggernaut and set the tone for all future superhero films to come. So what did Sony do? It decided to do the worst thing possible and overfilled the sequel with too many villains, too much mythos, and too much heart. By the end of The Amazing Spider-Man 2, you will be thoroughly entertained. You will also be thoroughly exhausted.

We first see Peter Parker’s parents (Campbell Scott, Embeth Davidtz) trying to escape the clutches of Oscorp and its CEO Norman Osborne (Chris Cooper). This prologue ends in tragedy. The story then picks up with Peter (Andrew Garfield) happily playing masked vigilante for a still skeptical New York. During a routine day, he must deal with a rogue Russian criminal (Paul Giamatti). His girlfriend, Gwen Stacy (Emma Stone), is graduating from high school and she senses an unsure future for her and her non-committal man.

One day, Spidey has a run in with an Oscorp engineer (Jamie Foxx) who is later involved in an industrial accident which turns him into a being of pure energy named Electro. He becomes obsessed with destroying the webslinger. Harry Osborne (Dane Dehaan) returns from boarding school to find his father dying. He is then warned that he too will perish from a rare genetic abnormality. The only cure? Spider-Man’s blood. When Harry can’t gain access to said serum, he injects himself with an experimental venom and is soon flying around as the Green Goblin.

So far, that’s a lot of plot. We have the origins of two villains (later, we’ll get the origin of another), vendettas from the past and the present, the ongoing struggles of our problematic power couple, and Peter’s own investigation into his parents’ death… and we haven’t even mentioned Aunt May’s (Sally Field) personal issues, Gwen’s potential acceptance to Oxford, and a mysterious man’s desire to create the Sinister Six. In fact, it’s safe to say that The Amazing Spider-Man 2 is one of the more overstuffed films you will ever see. Instead of settling on a single focus and refining it, this movie is too busy laying the foundation for franchises yet to be announced.

Granted, the action is all excellent, edge-of-your-seat stuff. True, all the actors are very good. But unlike the first film, which played like a teen romance that occasionally broke out into super-heroics, The Amazing Spider-Man 2 plays like an action epic where someone keeps stopping the stunts to inject scenes of schmaltz. Peter Parker cries more in this movie than a hormonally confused high schooler. Instead of adding to the overall experience, it takes away from it. We’ve already dealt with Peter and his puppy love for Gwen. If you’ve got bigger film fish to fry in Part 2, just fire up the oil and do it. Stop interrupting the narrative with moments of (now) false sentiment.

On the other hand, even if Webb had whittled away some of the hearts and flowers material, he’d still have  too many things to do with too little time to fully explore each and every one. A stand alone film where Peter takes on his childhood friend Harry Osborne would have been more than enough movie for an entertainment-starved audience ready for summer. By overfilling The Amazing Spider-Man 2 with frills, the end result is fun, if frustrating. 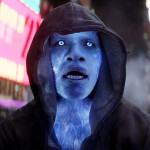 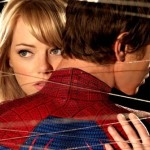 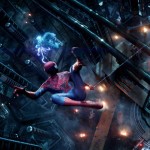 2 thoughts on “The Amazing Spider-Man 2”