Alvin and the Chipmunks: The Road Chip
By: Blake Crane

Future roadkill.
Buy It From Amazon
Buy It On DVD
Buy It On Blu-Ray

We’re four films deep into the Alvin and the Chipmunks cannon and we pretty much know what to expect by now, which is to say, not much. Punny titles like The Squeakuel and Chipwrecked promised, and delivered on, the same level of humor and enjoyment as a banal, sanitized internet meme.

The Road Chip continues the tradition of stuffing itself with immediately dated pop culture references, corny and unfunny jokes, forced musical numbers, and Jason Lee yelling, “AAALVINNN!” a few times. If there’s a compliment to give it’s that the ham-handedness feels slightly more tolerable this time around. Maybe there’s just numbness to the shrill chipmunk chitter-chatter (allegedly voiced by recognizable names like Justin Long, Anna Faris, and Christina Applegate, not that anyone could tell), or maybe the makers of these films are on autopilot to the point that they’ve forgotten to be (aggressively) annoying.

Music manager — and human caregiver to talking/singing chipmunks Alvin, Simon, and Theodore — Dave (Lee) is off to attend a pop star’s release party in Miami, and invites his new girlfriend Samantha (Kimberly Williams-Paisley) along. After spying an engagement ring, the chipmunks are convinced Dave is ready to propose, which would be, like, the worst thing ever because Samantha’s son Miles (Josh Green) is a big jerk (and also hates the Chipmunks). The fast enemies with thinly-drawn animosity all join forces to travel cross-county and stop the engagement. Complications arise when the chipmunks run afoul of air marshal Suggs (Tony Hale), who has a weird, personal axe to grind against the furry trio.

Of course, simplistic moralizing and personal betterment occurs along the way, mostly dealing with the burgeoning bond between Miles and the chipmunks over the roles of fathers in their lives. Despite the plainly stated sentiment, there’s a clunky delivery of the message, with Miles being mean or understanding at the request of the moment in the script.

If the relationship between Miles and the chipmunks is uneven, Hale’s performance as Suggs is downright schizo. Aside from the standards of being broad and unfunny, Suggs is a deeply disturbed individual. His shenanigans start with things like being pooped on by birds. As his frustration rises, we see he’s ruined relationships over his obsession with the chipmunks and he threatens bodily harm on nearly everyone he encounters. It’s hard to laugh at a bumbling official when he so obviously needs serious evaluation for Borderline Personality Disorder.

The road trip element of the film is nearly non-existent, with stops in Texas and New Orleans loose excuses for some themed musical numbers, though at least they section the film off a bit into more easily digestible doses of drivel. A huge, low-hanging fruit opportunity is missed at a Chuck E. Cheese’s in Alabama, where Alvin, Simon, and Theodore only eat without filling in for the animatronic characters. I mean, this stuff writes itself.

There’s not much for the adults that are being drug to the multiplex, aside from a few curious movie references that include The Shining and Pink Flamingos. Have fun explaining that last one to your kids. And judging by the reactions of the kids at the matinee screening, the only thing that registered with the target demographic was a gag involving chipmunk poop. They’ll always have that, I guess. 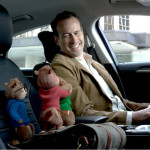 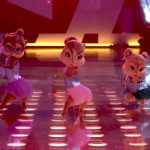 One thought on “Alvin and the Chipmunks: The Road Chip”