Not Ripley. Believe it or not.
Buy It From Amazon
Buy It On DVD
Buy It On Blu-Ray

With 2012’s Prometheus Ridley Scott returned to a franchise he began, shifting the focus from alien-wrought (with the help of corporate greed) carnage to more contemplative sci-fi. Though firmly entrenched in the Alien universe, the prequel largely did its own thing and did it very well. Alien: Covenant doesn’t really have a thing. Set between Prometheus and the original classic, Covenant recycles themes and moments from both, and while meant to serve as a bridge it feels more like a wheel-spinning retread full of half measures. The visuals dazzle, but instead of conjuring fear or provoking thought, the film elicits indifference through similarity.

On a colonization mission, the spaceship Covenant is making the long trek to an inhabitable planet when technical issues pull the crew out of hypersleep several years too early. It’s sort of like Passengers, only with way less creepy consequences. Even after the oblong-headed, acid-blooded aliens show up.

The ship is damaged and loss of life devastates remaining crewmembers, including newly widowed Daniels (Katherine Waterston), pilot Tennessee (Danny McBride), and captain Oram (Billy Crudup). Spirits are buoyed somewhat when the ship intercepts a mysterious transmission from a nearby planet that seems to be even more favorable for sustaining human life than the intended destination. Along with android Walter (Michael Fassbender), members of the team go on an exploratory mission to the planet’s surface, where they make horrific discoveries and encounter a familiar face who has expositional secrets to divulge.

After a prologue focusing on the creation of the first android (also Fassbender) and the mission interruption, the rest of the first two acts so recall Alien (and, to a degree, the James Cameron directed sequel Aliens), it’s almost as if Scott tinkered with his original creation George Lucas-style to merely punch up some effects. The landing party flies through a storm to search a desolate planet, comes upon a crescent-shaped spacecraft, and inadvertently unleashes hell. The big divergence is re-envisioning the chestburster as a backburster.

What’s missing are clearly defined characters. The crew of the Nostromo and the Colonial Marines from the first two films may have been broad in some instances, but they were much more than alien bait. That’s not the case in Covenant, which sets things in motion by having a guy go off alone in the woods to pee. When will secondary characters in lazy sci-fi/horror films finally realize this is a bad idea?

As the grieving yet capable heroine and cowboy hat-wearing hayseed, respectively, Waterston and McBride aren’t allowed to stretch beyond the predicament of the moment. Interpersonal relationships are lacking, the fact that the crew of colonists is made up of spouses used only for fleeting moments of melodrama. The faith of Crudup’s captain is without purpose in the screenplay’s hamfisted existentialism, his devotion to a higher power linked only to his incompetence. Interesting actors like Demián Bichir, Carmen Ejogo, and Amy Seimetz are stuck in completely nondescript roles.

The sole bit of depth exists, somewhat ironically, in Fassbender’s synthetics, due mostly to the actor’s nuance and not necessarily the material. The dichotomy he achieves while grappling with the notions of devotion to his creator and evolution of free will is engaging to a point, but loses its way in Paradise Lost quotes, references to Ozymandias, and solemn flute-playing. The mythology-building that’s attempted here ultimately adds little meaning to the franchise, and would actually be more at home in a rehash of Blade Runner, another Ridley Scott sci-fi benchmark, which, as it turns out, is also getting a sequel later this year.

This series’ monster is one of the most fearsome in film history, and like all sci-fi creatures or horror slashers, the more we learn about it the less impressive it is. Here, amid all of the thin philosophizing, appearances by the killing machines are condensed bursts of chaos with telegraphed action and no real moments of terror. Instead of mounting dread or building to a final showdown (or a point), Covenant just mashes the mayhem together with frenetic quaky cam and predicable, quick solutions to xenomorph problems.

The banality looks absolutely fantastic, Scott and cinematographer Dariusz Wolski beautifully capturing all the things we’ve seen before, only glossier. The score from Jed Kurzel naturally incorporates notes of Jerry Goldsmith and occasionally, though artificially, raises tensions. There’s never any true anxiety wrung from the conflict, however, and surprises are scarce. We know where all of this is headed and Alien: Covenant is just a leg of the journey that fails to expand on the promise of what came before and doesn’t hold a candle to what comes after. 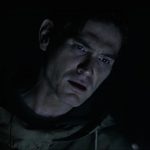 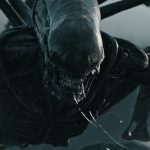 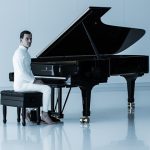