Chopping broccoli.
Buy It From Amazon
Buy It On DVD
Buy It On Blu-Ray

They say that people pull together during times of crisis. There is also a lingering fear that civilized society will fall apart when such a tragedy strikes unexpectedly. Both situations may be true, and yet we hope for the best. That’s not what happens in the new film from producer Eli Roth (Hostel). Working with some friends from South America, the U.S. horror geek has helped fashion a weird genre amalgamation that doesn’t always work — and when you consider it’s based in a bunch of anecdotes surrounding a 8.8 magnitude earthquake that occurred in Chile in 2010, it makes the results all the more odd.

Gringo (Roth, who also worked on the script), a divorced American dad on vacation, and his pals, impresario Pollo (Nicolas Martinez) and old classmate Ariel (Ariel Levy) are having a great time checking out the underground club scene in Chile. For them, it’s all about the liquor… and the ladies. One night, they meet up with three girls — Kylie (Lorenza Izzo), Irina (Natasha Yarovenko), and Monica (Andrea Osvart) — and convince them to hang out. While traveling around, seeing the sights, they end up in Valparaiso. Then, the area is hit by a massive earthquake. While trying to get to safety, everyone learns that a tsunami is on its way. Even worse, the aftershocks have caused the prison to collapse, and most of the inmate population in on the loose, and looking to cause trouble.

Aftershock is never quite sure what it wants to be. Its either a disaster film with horror overtones, or a horror film set within a natural disaster. Oh, and let’s not forget the opening 25 minutes or so which seem hellbent on mimicking the over the top neon excesses of Harmony Korine’s recent Spring Breakers. Hedonism and the hapless results of same can make for interesting fare, but co-writer/director Nicholas Lopez can’t develop a consistent tone. At first, we’re locked into the Gringo’s “looking for love” longings. Then Pollo turns out to be a Spanish Zach Galifianakis with a rich daddy and a penchant for throwing around his limited power. By the time we meet up with the babes, we’ve suffered through Ariel’s relationship struggles and a weird tour through Chilean wine country.

Then — boom! — the earthquake hits and the blood starts to flow. Before the convicts show up with rape on their minds, Aftershock struggles with set pieces meant to show off its gross-out gore chops. We get missing limbs, various body parts pierced by random building materials, and a lot of brutal, senseless violence. But once our survivors are stalked by the prisoners, the film kind of falls apart. There is no preparation for this material, no warning that the city could be threatened by marauding gangs of goons, and when they arrive, the inmates are nothing more than cogs, interchangeable gears in a movie machine slowly grinding to a dissonant, dull halt. Before we know it, a big reveal is offered (though it was telegraphed early on) and our final shot copies the WTF moments from ’70s schlock.

Handled correctly, with the right approach and overall tone, something like Aftershock could succeed. All the pieces necessary are present to tell a chilling story of modern-day survival. Sadly, Roth and his pals are so dedicated to dread (and debauchery) that the potential thrills get lost. 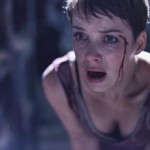 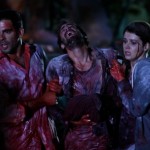 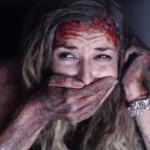