Host the Oscars. Please.
Buy It From Amazon
Buy It On DVD
Buy It On Blu-Ray
Buy The Book

Modern rom-coms and Ivy League schools actually have a lot in common.  They’re both vestigial organs from a bygone age when men were Wiffenpoofs and women married typewriter salesmen after high school (or else mooned over their English professors at Sarah Lawrence).  They’re also mutually indistinguishable from one another, even while they remain convinced of their perfect singularness with a certitude that lingers on the ledge of creepy self-reverence. Where Admission breaks the pattern is that just often enough it achieves a breathing sense of humor and that unlike Princeton, where our story is set, you’ll probably get your money’s worth.

Admission, adapted from Jean Hanff Korelitz’s novel of the same name by Karen Croner and directed by Paul Weitz (About a Boy, Little Fockers), is the story of Portia (Tina Fey), a Princeton admissions officer whose tidy life is torpedoed by a Marty Stu, John (Paul Rudd), who brings tidings that one of his students, a genius named Jeremiah (Nat Wolff), may be her biological son who was given up for adoption at birth.  From there we tick off the check boxes: meet cute, fall in love, fall apart, come back together, confront rival, learn to appreciate the little things, and live happily ever after.

This isn’t to say that all Admission has to offer is a paint-by-numbers plot, though. Fey and Rudd play well off each other, for the most part.  They’re both pros and the jokes in this are an order of magnitude or two funnier than your average Playing for Keeps or what have you (“You had unprotected sex with that vile Virginia Woolf scholar?!”).  It also allows itself to get surprisingly dark at times.  In the third act Portia swerves off the moral straight and narrow when she begins abusing her position at Princeton to get Jeremiah in.  When the movie goes places like that it can get downright exciting. Even Lily Tomlin delivers more than she possibly should have been able to as Portia’s unhinged, second-wave feminist mother (think more Mary Daly than Gloria Steinem), but it’s hard to believe that Weitz expected us to like this neglectful, spite-filled ogress.  I’ve seen lazier caricatures of feminists, but only on Fox News. 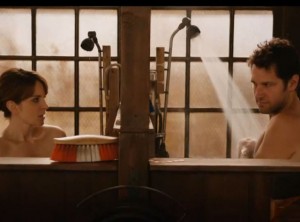 This scene is pretty sexy until you remember they’re rinsing off cow placenta.

What’s really surprising is that Fey manages to get her hairy man-hands around the sad stuff too.  It’s a bit one noted (we’re not talking about Meryl Streep, or anything) but she almost always makes it work.  The fact that Admission is so genuinely funny and the fact that its moving moments feel earned is actually a bit frustrating in the end assessment.  Admission had the potential to help drag a perfectly good genre out of the fetid swamp it’s been stuck in for the last couple of decades, it was so close, but it ultimately opts to be merely good.  This is more than a bit ironic considering the film’s conceit.

What keeps Admission from Say Anything or Annie Hall greatness isn’t that it’s hard to care about the gatekeeper to a club that’s more about economic signaling than cultivating future gymnasts or paleontologists.  It’s really that it just doesn’t apply itself. Rudd’s character, for example, has Prince Charming bona fides that are so outlandish that there’s actually dialog to that effect, a strategy which I found to be a bit curious (“Hey guys, you know how this character is pretty poorly drawn and implausible?  What if we draw as much attention to that as possible?”).  I get that this is Portia’s story, but if her love interest had been something remotely like an actual human being we really could have had something special here.

Alas, Admission, you can’t explain these blemishes on your transcript, but I’m more forgiving than the ludicrous, self-exploitative process of college admissions in America which you disconcertingly seem to be fine with, and won’t fault you for them.  If you’re already interested in Admission, then see it: It’s actually funny (even by regular comedy standards), it’s actually moving, it’s just a really good movie.  If you were hoping for a truly top tier experience, though, then you’ll have to rent Roman Holiday again — or if you really want a good cry, Summertime.