Awards season is once again in full swing. With numerous film critics’ groups and industry guilds preparing to unveil their annual awards — all leading to the ever-important Oscars — studios now have their PR departments working overtime to secure as many nominations as possible, from as many voting bodies as possible. This is done in the form of ads in trade magazines like Variety and The Hollywood Reporter, special promotional websites, and direct mailings to voting organization members. You probably already know that pictures like Room, Bridge of Spies, and Spotlight all have “buzz” working in their favor. They fit the classic mold of award-caliber movies. What you may not know is that every year the studios launch For Your Consideration (or FYC) campaigns for films and performances they know have a near-zero chance of being nominated for anything. In 2008, for instance, Disney ran a Best Picture campaign for High School Musical 3, also pushing stars Zac Efron, Vanessa Hudgens, and Ashley Tisdale in the acting categories. Last year, Paramount stumped for Transformers: Age of Extinction as Best Picture. Take a moment to let that sink in.

The current awards season has its own share of unlikely contenders. 20th Century Fox is touting Jason Statham as Best Supporting Actor in Spy. Disney is encouraging voters to consider Ant-Man as Best Picture. Similarly, they’re hawking all the male stars of Avengers: Age of Ultron — Robert Downey, Jr., Chris Hemsworth, Chris Evans, Mark Ruffalo, Jeremy Renner, and James Spader (who, as the voice of Ultron, never actually appears onscreen) — for Best Actor. They’re not only going for long shots, but also splitting the vote by putting everyone in the same category. Universal wants Sandra Bullock’s voice work in the animated Minions to earn her Best Actress consideration. They also humbly suggest Pierre Coffin for Best Supporting Actor. He’s the guy who makes the gibberish noises that serve as Minion-speak. The same studio is pushing Vin Diesel to score a nod as Best Actor in Furious 7. Vin Diesel?! Let’s be honest: The only person who thinks Vin Diesel is a great actor is Vin Diesel.

All of these films and performances are perfectly entertaining, but not exactly what anyone would consider the year’s absolute cream of the crop. So why do studios expend the time and money to make awards pushes for them?

One reason is contractual obligation. Major stars often have it written into their contracts that the studios will mount at least a nominal campaign for their latest project. That’s right — the awards strategy starts before the movie itself is even shot. Some of that may be attributable to good old movie star ego, but to some degree it’s also just typical Hollywood brand-building. A top-tier celeb wants to know their work will be supported. Also, keeping their name associated with awards talk ensures that they’re seen as important actors who deserve access to the best scripts floating around town. For the studios, it keeps them in the good graces of a star they want to remain in business with.

Sometimes an unlikely actor simply benefits from association with a good project. Judd Apatow’s Trainwreck could legitimately get award attention for star Amy Schumer, as well as for the smart, funny screenplay she wrote. In cases like the Critics Choice Awards and the Golden Globes, which have a separate category for comedies, it is also a strong candidate for Best Picture. Since the studio already had to create ads, DVD screeners, and other materials promoting the movie’s awards potential, they did what a lot of studios do: They essentially added the entire cast to the FYC list. Hence, voters are being asked to consider not only Schumer and co-star Bill Hader, but also supporting players like basketball pro LeBron James and wrestler John Cena, both of whom have small supporting roles. Will the words “Oscar-winner LeBron James” ever be uttered? You’re more likely to hear “President Kanye West” before that happens. Still, it can’t hurt to toss his name, or Cena’s, out there along with the more likely candidates, because you never know. 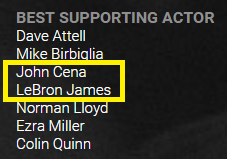 Financial success is another influence on awards campaigns. From time to time, wildly successful pieces of mass entertainment score major nods, even if they aren’t typical awards-bait. James Cameron’s Avatar, which earned a Best Picture Oscar nomination, is one fairly recent example. This line of reasoning is surely behind Disney’s all-inclusive Avengers: Age of Ultron campaign and Universal’s suggestion that Jurassic World be considered “in all categories.” (It’s probably safe to say that Bryce Dallas Howard isn’t holding her breath for that Best Actress recognition.) Both films were massive blockbusters, and with so much popular appeal, their respective studios are hoping against all reason that voters will see them as award-worthy. Warner Brothers is doing a similar thing, launching a campaign for Mad Max: Fury Road, a commercial hit that earned ecstatic critical reviews. A few years ago, the Oscars upped the number of Best Picture nominees to as many as ten, hoping that more mainstream fare would be included, thus theoretically upping viewership for the telecast. Studios are jumping on this idea, even though they likely recognize the chances are not entirely in their favor.

Perhaps the most blatant example of this factor at work in the 2015 awards race comes in the case of Furious 7. When it opened to big numbers last spring, star Vin Diesel publicly said he wanted it to be the first movie in the series to get a Best Picture nomination. It was, after all, the only one to have any semblance of weight to it, due to the need to address co-star Paul Walker’s untimely death. Universal (the big leader in offbeat campaigns this year) ran with that ball. Not only are they trumpeting the film for Best Picture and Best Actor, but also the extremely unlikely Dwayne Johnson, Tyrese Gibson, Chris “Ludacris” Bridges, and Jason Statham (again!) for Best Supporting Actor. They’re even recommending it be thought of in the Best Adapted Screenplay category. Because Fast & Furious movies are known for their brilliant writing.  Or maybe they think voting bodies will consider creative uses of the words “dude” and “bro” to be impressive.

The Critics Choice Awards, given out annually by the Broadcast Film Critics Association, wisely bestow prizes for different genres, which may benefit some of the titles listed above. But beyond that, the chances of these films and performances landing major award nominations are lower than Kim Kardashian’s neckline. Still, there’s something endearing about the optimism. Who knows — perhaps these FYC campaigns will get voters thinking outside the stereotypical awards season box.

And if, by some radical realignment of the cosmos, Vin Diesel somehow does walk off the with Best Actor Oscar… well, just imagine how amazing that acceptance speech will be.