A Pigeon Sat on a Branch Reflecting on Existence
By: Paul Brenner

That Three Buck Chuck is a killer!

In Roy Andersson’s A Pigeon Sat on a Branch Reflecting on Existence, the phrase “I’m happy to hear you are doing fine” becomes the one spark of emotion and the mantra uttered by a succession of characters in a dead world – in Leonard Cohen’s lyric, “There is a crack in everything. That’s how the light gets in.”

Andersson’s film aesthetic is droll and ironic and, on the surface. distancing, but the passion bleeds through every frame. Andersson is the Jim Jarmusch of Stranger Than Paradise without the hipster ethos or the Jacques Tati of Playtime on Quaaludes. And he’s similar to Tati in other ways too — like Tati this is only the fifth feature film by Andersson in four decades.

Andersson frames his films in succession of deep focus master shots. In A Pigeon Sat on a Branch Reflecting on Existence, the film consists of 37 fixed camera shots in boxed-in interiors, each shot telling a short vignette, ending in a droll gag or punch line. As with Tati, the viewer takes in the shot and chooses to scan the frame for clues or fixes on certain characters of interest — the direction is in the initial set up but the guidance within the frame is the viewers’ choice. The shots are tableaux and are like looking at a museum exhibit. Andersson makes this explicit in the opening shot of the film where chunky and pasty museum visitors are staring into glass cases of birds in flight. In the background of the shot a dinosaur exhibit from the next room appears to be staring in ready to devour the visitors and the bird exhibit. This technique can be distancing, like a freeze frame of a Kubrick zoom shot from Barry Lyndon. But it becomes unnerving when at certain points in the film, gazing at the tableaux, one of the characters in the scene turns and looks into the camera, as if we were the ones in the tableaux and the characters in the scene are looking at us (or ignoring us).

Andersson centers his film on two hang-jawed and depressive salesmen who morosely encounter people and try to sell them novelty gag gifts – an “Uncle One-Tooth” mask, vampire teeth (their bestseller) and a laugh bag that issues forth mechanical laughter – but they never make a sale (their sales pitch has curdled into an emotionless monotone. One salesman, the short and fat Jonathan (Holger Andersson), occasionally bursts into tears and has horrific dreams, while his taller and equally flabby partner Sam (Nils Westblom) runs the show. Jonathan and Sam travels the landscape like an existential Abbott and Costello or the characters in the play Samuel Beckett never got around to writing but are the embodiments of “I can’t go on. I’ll go on.” They are Andersson’s hook, leading us through a succession of deadpan and hilarious comic vignettes that run the gamut from a guy dropping dead opening a wine bottle while his wife sings in the kitchen to a lab technician talking on her cellphone while a monkey is strapped to a torture device and getting electrocuted to an elaborate time warp in which a rundown present day tavern is suddenly visited by the army of the 18th century Swedish king Charles XII as his army proudly marches away to battle the Russians.

A Pigeon Sat On a Branch Reflecting on Existence is a film of continuous delight and surprise and a film should be seen by any film lover who cares about the state of cinema – if there still are any of us left out there. 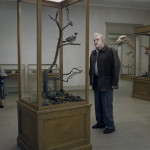 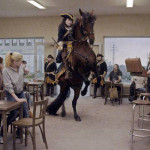 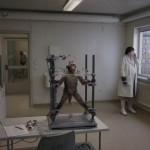