A Monster Calls
By: Blake Crane

And he wants his trousers back!
Buy It From Amazon
Buy It On DVD
Buy It On Blu-Ray
Buy The Book

A Monster Calls is a rare children’s fantasy that confronts complicated emotions head-on and doesn’t shy away from ugly sentiment. It might get heavy, but the somberness isn’t enough to make the summoning of a giant tree monster to cope with grief any more profound than standard patronizing fairytales. Though the methods of allegory are somewhat unique, the lessons learned are more edifying than inspiring.

On the edge of adolescence – “too old to be a boy and too young to be a man” we’re told, 12-year-old Conor (Lewis Macdougall) is rightfully wrecked. He’s bullied at school and terminal cancer is slowly breaking down his mother (Felicity Jones). His recurring nightmare of losing her is frightening.

There’s some solace in art. A traumatic encounter with his schoolyard tormenter is remedied by snuggling with mom and watching King Kong. Conor also disappears into drawings, mostly of monster’s faces. One night during a burst of artistic expression, the large tree in the creepy graveyard near the family home comes to life and approaches the boy in menacing fashion. A booming voice (that of Liam Neeson) promises that he’ll appear over a series of days to tell three stories. A fourth story will be Conor’s to tell.

Right away, A Monster Calls sets a repetitive pattern for itself. Yes, the structure is ostensibly no different than A Christmas Carol, for example, but the yarns spun by the monster followed by bits of Conor’s depressing real life are segmented bluntly. Wouldn’t you know it, the monster’s tales symbolically tie into the boy’s storm of conflicting feelings – increasingly so – and if that weren’t enough, the monster plainly states the various morals being expressed.

The animated storytelling sessions voiced by the monster are visually interesting with a watercolor look that adds a sense of momentum and vivacity. The endings aren’t happy, or pure, but the ambiguity is undercut by the explanations. Throughout the movie, the fantasy and the real-life drama are rendered beautifully by director J.A. Bayona, but the technical construction is also too apparent in the narrative. When the planned process designed to jerk the tears is so plainly seen, it’s harder for them to actually come.

The two lead performances by Macdougall and Jones are so good they occasionally break us out of the monotony. Macdougall subtly displays despondence and dread. When he interacts with his father (Toby Kebbell), who now lives thousands of miles away with a new family, joy is tempered by the fact he knows the visit is temporary. The anger in dealings with his hard-lined grandmother (Sigourney Weaver, with an uneven English accent) bubbles over when appropriate. Jones doesn’t overplay her character’s decline and expresses fear, strength, regret, and concern for her child without having to say a lot – unlike the movie as a whole.

The screenplay by Patrick Ness, adapted from his own novel, strives to be serious-minded but the fussiness is as wooden as the hulking creature it uses to laboriously lay out its points. And those themes – that it’s normal to hurt, to express your grief, and to experience swirling, perhaps even shameful, emotions in times of despair on the way to hope – all feel obvious. Kind of like having Liam Neeson voice a giant, authoritative tree monster. 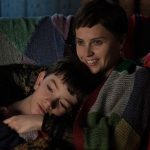 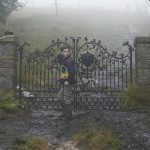 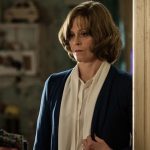 One thought on “A Monster Calls”