Smells like teen spirit.
Buy It From Amazon
Buy It On DVD
Buy It On Blu-Ray

If you live along Florida’s west coast, you already known the story of Winter the dolphin. Tangled in a crab net and badly injured, the creature’s tail had to be amputated. With the help of some scientific know-how and a lot of community support, the sea mammal got a prosthetic appendage and a fascinating human (or maybe that should be “mammal”) interest story was born. When Hollywood came-a-callin’, they added some precocious kids, gratuitous Morgan Freeman, and slices of sunny local color to create Dolphin Tale. A wholesome family hit, thoughts of a sequel soon emerged. Luckily, Winter’s tale got a bit more complicated after the first film, resulting in the equally engaging, if somewhat saccharine Dolphin Tale 2.

Since the original, our aquatic hero has been doing fine, adjusting to life with a plastic rudder on his back end. Then Winter loses her poolmate, a dolphin named Panama. The USDA mandates that all captive dolphins share their space or be shipped elsewhere. This leaves Clearwater Aquarium fixture Dr. Clay Haskett (Harry Connick Jr.) and his daughter Hazel (Cozi Zuehlsdorff) in a quandary. They have to find another dolphin or lose Winter. Hazel’s platonic friend Sawyer (Nathan Gamble) is also concerned about this development, as well as mulling over an offer to spend the summer at sea in a prestigious research program. Of course, this would keep him from Winter, and his friends. As luck would have it, a baby dolphin named Hope shows up at the facility. The rest of the movie then becomes a series of concerns: about Hope, about Winter, about the possible bond between these critters and the audience reaction to all of it.

Considering how sappy it could have been, you have to credit Dolphin Tale 2 for being only borderline schmaltzy. It’s so good-hearted and emotionally honest that it’s hard to not feel vindicated instead of manipulated when the tear duct waterworks start. This is a movie that earns its feel good facets, that doesn’t go overboard with the preaching while finding unique ways to deliver a bit of teaching. Thanks to the efforts of writer/director Charles Martin Smith (he helmed the first film as well), we get a real feel for the work being done at the aquarium. Without going overboard on the techno-babble, we understand the need for the USDA regulations as well as Haskett’s own “rescue/rehabilitate/release” mantra. We also get to experience the excitement of the subject matter and what compels people to work on behalf of sea creatures in the first place.

That’s huge, right there. Most family films dumb down their designs to sync up with the “lowest common denominator” ideal Hollywood lives by. Sure, Rufus “the rude pelican” can be a bit much, an obvious attempt at running gag comic relief for the wee ones, but the rest of the narrative skirts important “adult” issues with the right amount of authenticity without sliding into cliche or contrivance. Even the budding romance between Sawyer and Hazel is handled with well-mannered maturity. Sure, we do grow a bit tired of the constant ethereal underwater sequences, each one aiming to ensure our sympathy with these beings, but they are beautifully shot. In fact, the film presents a version of Florida that only tourist brochures can actually provide.

If all you wanted from Dolphin Tale 2 was more of the first film, you may actually be a bit disappointed. Charles Martin Smith and his returning cast have tried to make something that stands on its own, which expands on the Winter mythos without simply repeating what worked before. By introducing more adult themes and a slightly darker, more daring tone, this sequel actually succeeds where the first film faltered. Those who think Winter has “gone Hollywood” should rejoice in her treatment here. Dolphin Tale 2 is a solid family entertainment. 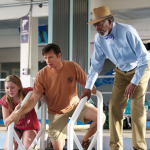 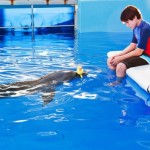 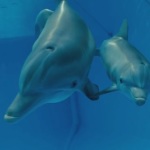