"I think it's time you learned to walk yourself..."

Modern indie film has an abundance of hangdog slackers. But none are as effective as Jason Schwartzman, he of the long face, sad eyebrows, and terribly good comic timing. And as the leader of the pack, Schwartzman has never been as hangdog as he is in 7 Chinese Brothers, writer-director Bob Byington’s light character study that fits well into the current mood of the small indie comedy-drama: It has the familiar indie conventions, while throwing in a hook or two that pat the genre on the head in a way that’s both cute and a bit mocking. (We even get the R.E.M. song “7 Chinese Bros.” over the closing credits, a move so typically Hollywood that it’s worth a chuckle.) All this might not have worked ten years ago, but Byington understands this tenor (try Harmony and Me). And he knows to let Schwartzman do what he does well.

Schwartzman plays Larry, a guy who regularly mixes hard alcohol into his Big Gulp, and is about to get canned from his job at the Buca di Beppo Italian restaurant. Larry exudes his own idea of personal charm, but it works on just about nobody. His drunken sense gets him joking unnecessarily and challenging others. No wonder his best friend is his mopey-looking French bulldog (Schwartzman’s scene-stealing real-life pup, Arrow). After plenty of mornings waking up on the couch (or floor), Larry gets a job at a Qwik Lube and, remarkably – here’s a first for the slacker genre – he actually likes it. In fact, he mentions that fact twice in one conversation with Norwood (Tunde Adebimpe), Larry’s drinking buddy and supplier of prescription pills, an orderly at the facility where Larry’s grandma (Olympia Dukakis) resides.

A wonderfully surprising dynamic to 7 Chinese Brothers is how well Schwartzman and Adebimpe play together. If Larry is sarcastic, Norwood is flat-out deadpan, Adebimpe an appealing straight man to Schwartzman’s occasional dramatics. Byington appears to let the two actors drive, and the scenes between the two tend to play out quietly (and are very funny). The shared monotone comes in handy during the third act, when the proceedings take on an appropriate gravity.

Aside from Adebimpe, the real second banana in 7 Chinese Brothers is Arrow the dog. Credit Byington for that one, capturing the lazy canine with a hilarious series of low-angle close-ups that put us right in Arrow’s line of sight or food bowl. Schwartzman carries on human-like conversations with Arrow (“you can’t sleep all day”… “remember that guy you met at the Memorial Day party?”) as we cut to Arrow about as unaffected and disinterested as any pet could be. Consider it a cheap device if you will, but Arrow does have real purpose in the film, giving Larry responsibility and someone to love under his own roof.

The film’s strong ensemble includes a who’s who of indie film directors including Alex Karpovsky, Alex Ross Perry, Michael Tully, and Byington himself (all in small roles). They complement intriguing turns by Stephen Root as a touchy-feely attorney and an actress named Eleanore Pienta as the Qwik Lube manager that Larry pines after.

I’m sure many who’ve tired of seeing lonesome semi-hip do-nothings onscreen may have thin patience with 7 Chinese Brothers. But if the category still grabs your attention, Schwartzman and cast – plus dog – will really do a fine job holding it for 75 minutes. 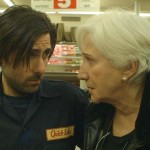 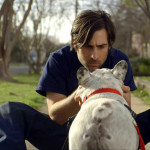 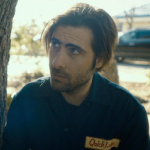 One thought on “7 Chinese Brothers”