47 Meters Down
By: Blake Crane

But I Don't Know the Metric System!
Buy It From Amazon
Buy It On DVD
Buy It On Blu-Ray

The above is an exchange from 47 Meters Down, the latest entry in the ever-expanding subgenre of sharksploitation. The film, sadly, doesn’t exploit its gigantic, credibly CGI-ed beasts for harrowing thrills, survivalist desperation, or character catharsis. They’re just kind of there to swim by and occasionally take a chomp as the majority of the trapped-underwater-trauma is relayed with stilted, laughable dialogue and repetitive actions that drag instead of distress.

What could be a relatable nightmare scenario that grows increasingly hopeless is undone by awkward exposition and overexplaining. 47 Meters Down is much more effective when the doomed divers are saving their breath and interacting with the murky depths instead of frequently talking about how they’re running out of air.

Sisters Lisa (Mandy Moore) and Kate (Claire Holt) are vacationing in Mexico. Repressed Lisa confides in her adventurous little sis that she was just dumped by her boyfriend for being boring. After a therapeutic night on the town and some prodding from a couple of charming local guys, Kate convinces timid Lisa to go shark cage diving. What better way to prove to the ex you’re not dull? Both sisters prove to be a little dim, however, when they hop on the corroded boat captained by laid-back, sunburnt dude Taylor (Matthew Modine). After watching a 20-foot great white approach, the girls get into a rusty cage attached to a winch held together with duct tape and descend into the sea. A cable snaps, they drop to the ocean floor, and the sharks begin to circle.

Despite the clunky setup of Lisa’s clear emotional arc that will lead from Nervous Nellie to conscripted protagonist, director/co-writer Johannes Roberts creates a sense of panic in the early moments of the ordeal. As the captain locks the girls in the cage, we see their POV from just under the calmly rippling surface up to the clear sky. It’s a beautiful shot that serves as a transition from the bright beaches and turquoise seascapes to the dark blue-grey of the unforgiving abyss. The view becomes rapidly foggier during the deep plunge, the camera sweeping around the cage and floating above and beside the bars, suggesting the threat that lurks just outside. Moore is believably freaked and Holt is credible as the calming influence.

With communication to the ship cut off, the girls must wiggle out of the enclosure and ascend to be within radio range of the captain, who apparently spent all of his money on state-of-the-art diving equipment instead of a sturdy cage. The first trip up a few meters is nerve-wracking, with Kate’s limbs precariously flailing and looking like an inviting meal. Repeated ventures only serve as opportunities for Modine’s captain to impart perfunctory information, warning the girls about getting the bends if they try to make a rapid dash for the surface or the dangers of changing oxygen tanks too quickly. All of this insight will probably come into play at some point, we guess.

Trapped in the dire situation, the psyches of the sisters don’t really deteriorate, their malleable mindsets alternating between confident and unsure. Similarly, Roberts fluctuates the tone from claustrophobic thriller to silly action/horror. The few moments of squirminess, like a disorienting underwater spin with a flashlight or a desperate attempt to grab a spear gun, aren’t paid off with dread or carnage, while a majority of the shark interactions are cheap jolts followed by calm.

Intensity gives way to silliness, especially in a final act that tries to shock viscerally and then psychologically, failing at both. Instead of leaving us gasping for breath – like the sisters the many times they look at their pressure gauges, see that they’re almost out of air, and then exclaim, “I’m almost out of air!” – 47 Meters Down elicits a shrug. 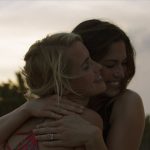 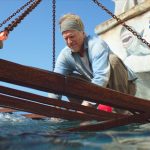 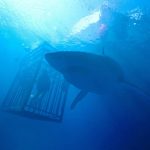 One thought on “47 Meters Down”