Getting pruny.
Buy It From Amazon
Buy It On DVD
Buy It On Blu-Ray

Charlotte Rampling’s icy steel gaze, sizes you up, takes you in and spits you back out. As a young woman – a sleek model and an even sleeker actress – Rampling was a motion picture glossy and her film roles (Farewell My Lovely, The Verdict) were post-modernist variations of the film noir femme fatale. In her most notorious role as a concentration camp inmate in The Night Porter, Rampling was more of a threat than Nazi Dirk Bogarde. Except for her cracking veneer in Stardust Memories, Rampling remained a distancing and dangerous object of desire. But as she aged, her look became more penetrating, sizing up the whole universe, and in Francois Ozon’s Under the Sand and The Swimming Pool, Rampling conveyed a depth of soul she didn’t have before. And now in Andrew Haigh’s 45 Years, as Kate Mercer, the bedrock in a long marriage ready to crack apart, her hot wire emotional undertow beyond the hard, resilient stare is the center of existence, the culmination of a career.

Kate is married to Geoff (Tom Courtenay), a sturdy but dowdy husband obsessed with routine (reading, watching television, eating scheduled meals). Both are retired. Kate cares for Geoff and is in full control of their Norfolk household. As the film begins, she is busily planning their 45th wedding anniversary (walking through an old reception hall where the couple plans to celebrate, Kate remarks, “So full of history. Like a good marriage”). But like a bolt from the sky, Geoff receives a letter informing him that Katya, a woman who Geoff knew before he met Kate and who died in a mishap in the mountains of Switzerland, has suddenly been discovered, preserved in a melting glacier (“How strange would that be,” Geoff says, “She’ll look just like she did in 1962”). This revelation of a long, suppressed past and then Kate’s uncovering of further secrets, casts a disturbing and tragic shadow over the seemingly steady 45-year marriage.

Writer/director Andrew Haigh (Greek Pete, Weekend) does not bludgeon with quirky, life-affirming oldsters as in The Best Exotic Marigold Hotel, Quartet or Cocoon, but directs with a quiet restraint reminiscent of Make Way For Tomorrow. Haigh works in widescreen long shots that take in the Mercer’s world and their personal connections, allowing Haigh, in this chamber piece etude, to concentrate on the quiet, emotional ramifications of their lives. An uncomfortable sense of time running out/time wasted and a troubled past is indicated by the sound of a carousel slide projector over the opening credits, the ticking of clocks and the tolling of bells (Kate also ponders buying Geoff a watch as an anniversary gift). Haigh is far less subtle with the plot points (which bang into the story with a loud thump) but Courtenay and Rampling expertly downplay the clunky portions of the script and it all whispers by.

There is a joyful scene in the film when Kate and Geoff cut loose and dance to “Stagger Lee.” This is reflected in the final sequence, when their past in now bared like an open wound, but Kate and Geoff still must attend their anniversary party with false smiles. After Geoff (who wants to put it all behind them) informs the partygoers “As we get older, we stop making choices,” the couple takes to the dance floor and dances a solo to “Smoke Gets in Your Eyes.” Haigh shoots this emotional highwire act in one long take. At the end of the dance, Geoff is overcome and holding Kate’s hand, raises his arm triumphantly in the air.

Then in a shocking reaction that hits like a thunderclap, Kate defiantly breaks her grasp from Geoff. Her glaring look at the crowd with an epiphany of conflicting emotions in her expression, Rampling nails the final shot of the film. Along with City Lights, Queen Christina, and Manhattan, this closing shot of 45 Years is an image for the ages. 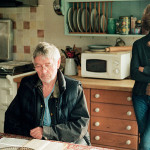 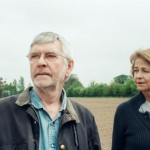 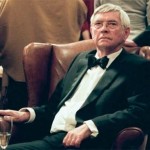