Welcome to Baskin-Robbins.
Buy It From Amazon
Buy It On DVD
Buy It On Blu-Ray

Creepy clowns are a horror staple, from film to the local October haunted house. And now, there’s a bunch of them just hanging around on street corners and in the woods and freaking people out.

The iron is always hot for a bastardized take on the slapstick performers, and the grimy aesthetic of writer/director Rob Zombie lends itself well to clown-driven unpleasantries. While some of the smeared greasepaint, mixed with blood, and twisted carnival set pieces in 31 are striking, Zombie has nothing to say beyond the look. It’s been a typical issue with the director’s horror oeuvre, outside of The Devil’s Rejects, which shaped some characters within the carnage.

31 is a straight-ahead stalker/slasher derived from The Most Dangerous Game and The Running Man, filtered through an obvious Tobe Hooper influence. That’s all well and good, but a lack of originality in the slaughter, coupled with broad blanks as the hunters and huntees, turns the movie into a checklist of genre devices that fail to connect or terrify, or hide its inspirations.

It’s Halloween 1976 and a group of carnies – played by Sheri Moon Zombie, Meg Foster, Jeff Daniel Phillips, Lawrence Hilton-Jacobs, and Kevin Jackson, are packed into an RV and heading to their next gig. After a quick stop at the obligatory gas station in the middle of nowhere run by a weirdo, the travelers are kidnapped and taken to an abandoned industrial complex. Bound, gagged, and numbered 1 through 5, they’re informed by aristocratic occultist Father Murder (Malcom McDowell) that they’ll be playing a game of 31. Over the next 12 hours they’ll be hunted through the factory’s maze by sadistic clowns and the only rule is to survive.

The commentary, of course, involves the elite using their undisputed power to pit those beneath them – their minions and the collateral human damage in their self-gratifying wake, against each other. That’s as deep as anything goes, however. Well, besides that rare squirmy moment when a knife is plunged into an abdomen and dragged up to a poor victim’s sternum. Father Murder and his fellow powdered-wigged nobles (Jane Carr and Judy Geeson) set odds for the prey’s survival and at one point place wagers atop a glowing pentagram table. That could be a cool frame in a heavy metal music video, but certainly not worthy of the Kafka quote that opens the film.

The slaying is just as tedious as the themes. Problems with the hunt begin with unclear architecture of the factory and spatial relations between the characters. The group is separated when needed and brought back together when they need to shout something clever to one another like, “Come on!” or, “What the F-!” The villains roaming the dark corridors are more annoying than scary, none more so than a little person made up to resemble Hitler, a swastika painted on his chest just in case we don’t get it. A large chunk of the hunt is devoted to him walking around and shouting threats in Spanish.

In addition, there’s a really tall baddie, a sexy woman stalker, and two dudes in masks with chainsaws. As if Hooper’s Texas Chain Saw Massacre hadn’t been invoked enough with them and the mid-70s setting, we also get a bloody woman limping on a desolate road. All that’s missing is guttural fright.

The only thing that moves the creepy meter at all is Richard Brake’s performance as the nasty Doom-Head, with his deep, cold affectation and crooked clown smile outlined in blood. His philosophical monologue at the outset promises a movie that doesn’t materialize, and it takes way too long for him to enter the central game. When he finally does, he adds some bizarre flavor that doesn’t smack of trying too hard. Everything else in 31 is just a bland exercise in dreariness. 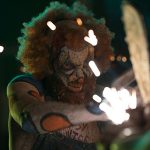 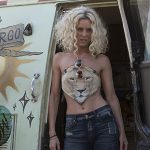 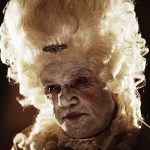