We're counting at least 67 sins.
Buy It From Amazon
Buy It On DVD
Buy It On Blu-Ray

The biggest sin of 13 Sins is its failure to meet its potential. Like the much better Cheap Thrills, this remake of a 2006 Thai thriller explores how low someone will sink for financial gain, but it’s more interested in twists and telegraphed gotcha moments than in generating any real payoffs. In order to reach an unsatisfying and inevitable end, the rough exercise sacrifices a consistent tone and tension for trivial plotting. While the pace is brisk, the purpose is lost in clumsy transitions from jovial to alarming and a redundant series of awful acts.

The universe is conspiring against everyman Elliot (Mark Webber). He’s fired from his job and the loss of health insurance means his mentally challenged brother Michael (Devon Graye) may be put in a group home. He also has a baby on the way with fiancé Shelby (Rutina Wesley), and is forced to take in his ailing and antagonistic father (Tom Bower). Saddled with debt and filled with anxiety, Elliot receives a life-changing phone call. The chipper, British-nobleman-sounding voice on the other end of the line promises a shot at millions of dollars if Elliot completes a string of 13 challenges. He instinctively jumps at the chance and accepts the first task, killing a fly buzzing around his car. Once he confirms money has been transferred into his bank account, he finishes the second job – eating the fly. Like the old lady who swallowed the fly, obstacles for Elliot become increasingly harrowing, from property damage to cruelty to a child to more repulsive felonious activities.

There are nebulous rules, of course, that must be laid out:  Elliot cannot let anyone know about “The Game” (as it is called), and failure to complete any step means he forfeits all of his winnings. Director Daniel Stamm and his co-writer David Birke start things off strong, opening with the gruesome conclusion to another Game that quickly goes from comedic to tragic. The introduction of sad sack Elliot works, too, balancing the issues with the brother, the fiancé, and the father economically without belaboring their adverse effects on his financial and emotional security. He makes a believable mark for the runners of The Game, and also a believably willing participant lured by the cash and the ease of the first few challenges.

As we inevitably get into the more lurid business, Elliot’s unraveling is undermined by the barreling from task to task. Webber displays the right mix of resolve and dismay, but isn’t allowed to pause long enough to make us care. Amputating someone’s arm and brutally beating someone in a hospital waiting room are only speed bumps en route to the grand finale of the 13th test. The film is less about the journey through a crumbling psyche and more about the destination where all will be revealed.

When we’re taken to the periphery of Elliot’s quest, it’s for halfhearted gap-filling in the form of a police pursuit and a strange man investigating the evil empire behind The Game. Stamm somehow finds a way to drain the personality from the usually charismatic Ron Perlman, who plays a police detective on Elliot’s tail. Pruitt Taylor Vince is well-cast but underutilized as the not-so-crazy conspiracy theorist who claims the One Percenters (actual verbiage used) exercise limitless power to control the rest of us.

If that’s true, they sure go to great lengths for amusement, apparently outfitting the entire city of New Orleans with spies and cameras, and somehow figuring out a way to gain control of any cell phone at any moment. The circus theme ringtone they give Elliot is a nice touch. However inexplicable the particulars may be, 13 Sins could’ve worked had it maintained focus on a normal guy compromising his ethics for a better life and experiencing horrific results. The bigger the story gets, the less it resonates. All the pieces are put in place only to hastily pull the rug out, making the film – just like The Game – feel all too familiar, and worse, fixed. 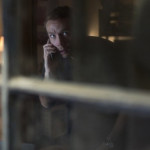 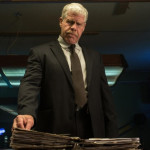 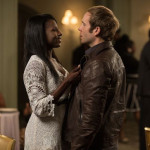