The 10 Greatest Movie Monsters Ever
By: Bill Gibron

They are the stuff of nightmares, the lights-on manifestation of that “thing” going bump in the dark, moonless night. They aren’t serial killers with baffling back stories and a butcher knife/machete in hand. They aren’t humans cursed to drink blood, sprout fur, return from their mummified sleep, or pitch their superpowers toward evil and malevolence. No, these are monsters, the movie medium’s interpretation of what we all believe the Boogeyman and his minions must look like inside hell’s hideous primer. Yes, we’ve left off a few famous ones and added some that aren’t so familiar, but one thing’s for sure: These scary stars make for a terror-ific Halloween each and every year. 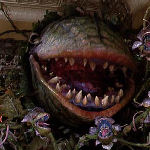 Poor Seymour Krelborn. All he wants to do is impress his boss, Skid Row florist Gravis Mushnik and his fetching fellow employee, Audrey. So he grows a weird alien plant that thrives on only one thing: human blood! Of course, Seymour ends up having to feed the thing over and over and over again. Both the Roger Corman original and the sensational Frank Oz musical use the same premise, so you can pick your particular fear foliage — singing, or simply starving for a little flesh fertilizer. 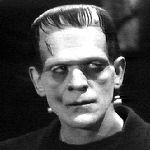 Born out of the mad desire from its scientist creator to “play God,” this collection of reanimated body parts is initially both terrifying, and a bit tender. But when he escapes the doctor’s castle and is seen stumbling around the countryside, out come the pitchforks and the torches. Oh, and did we mention that fire enrages the brain-damaged behemoth? Thanks to a definitive performance by Boris Karloff, this is the best of Universal’s many creatures, and an enduring horror image and icon. 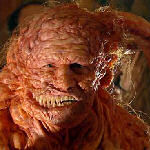 Now here’s a new one from a true under-appreciated post-modern classic. James Gunn wrote and directed this snarky little splatter fest featuring Michael Rooker as a man who is infested with space parasites from a crashed meteor. Over time, the extraterrestrial slugs turn the man into a tentacled pile of goo. Even better, he finds a local gal, impregnates her with his disgusting demon seed, and the result is a big fat quasi-human balloon just waiting to burst forth with all manner of killer snails. 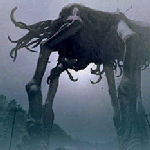 For most of the movie, the trapped characters from Stephen King’s classic novella are dealing with all manner of mutant beasties, including winged bat-things and spike-backed spiders. But the minute our hero and his tagalong survivors take to the countryside, they realize just how horrible the title fog really is. As they contemplate their next move, this H.P Lovecraft-inspired horror appears, demanding that anyone left alive truly abandon all hope. It’s appearance remains part of one of the most shocking endings in all of the genre. 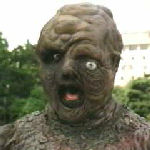 Another of the man-into-monster entries on this list, we pay tribute to Troma’s endearing creation, an awkward feeb named Melvin Ferd III who is bullied, and thanks to a nuclear waste accident, becomes a horrific homunculous with revenge on his mind. Granted, this particular fiend has a penchant for his mop and his tutu (don’t ask), as well as a body that resembles as clammy collection of “brown grapes.” Ewwww. While “it” eventually became a crusader for the environment, Toxie remains the indie giant’s true legacy. 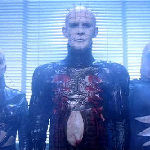 In the film, these truly tortured souls from the depths of the underworld are called the following: “Explorers in the further regions of experience. Demons to some, angels to others.” Indeed, these former humans have been horribly mutilated as part of a pack with darkness, their reward being the ability to experience both terrible pain and unbelievable pleasure… and the chance to share it with unsuspecting individuals who solve a specific puzzle box. Their “leader,” known as Pinhead, is one of the most iconic new fright figures ever.

As an allegory for the atom bomb, as a way for Japan to make media sense of its wealth of its WWII losses, this oversized lizard with the bad attitude is the greatest giant movie monster of all time. He trumps King Kong and makes minced turtle meat out of Gamera. Over the years, the specious special effects and non-stop stream of equally oversized opponents have made Godzilla significantly less scary, but as an idea and a realized concept, this creature is incredible. 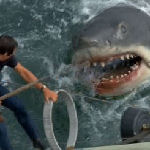 Granted, most of the underwater footage you see is of actual sharks swimming around in their natural habitat, and novice director Steven Spielberg knew that his robotic imitation wasn’t about to fool anyone. So he pulled the perfect Hitchcock, hiding the true terror just beneath the surface, doing for sun and fun in various bodies of water around the world the same thing the Master of Suspense did for showers in Psycho. Beachgoers haven’t been the same since. A classic of suggestion and the slow reveal. 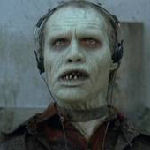 When George Romero couldn’t get the funding to make a World War Z–like trequel to his original zombie classics, he had to come up with a new set of ideas…and fast. One holdover was the notion of “training” the undead, a desire to either domesticate them, or force them to fight each other for the sake of humanity. Into this confusion comes “Bub,” named after a mad scientist’s surgeon father. A true member of the cannibal corpse community, this eerie innocent seems safe enough… until he escapes. 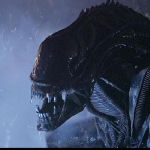 You’ve got to give H.R. Giger (and those in charge of bringing his sexualized biomechanical monstrosities to life) credit. Audiences in 1979 had never seen anything like his creature concept for this horrific “haunted house in space” exercise. Ridley Scott added his own commercial advertising touches, but it was the phallic fiend with a double mouth and acid for blood that ended up becoming the greatest movie monster we’ve seen to date. From the moment he “burst” onto the scene, this being changed the way we look at extraterrestrials forever.