I could eat.
Buy It From Amazon
Buy It On DVD
Buy It On Blu-Ray

When is a sequel not a sequel? When it’s the terrifically claustrophobic cat and mouse thriller 10 Cloverfield Lane. A psychological cousin to the famed found footage monster movie that came out of nowhere to dominate the January box office in 2008, this new extension of that universe is less about the rampaging beast outside and more about the possible monsters within. Indeed, when we meet up with our characters, they are already in crisis mode, and where this newfound situation sends us is rife with paranoia and suspense.

When the story begins, it is inferred that our heroine, Michelle (a terrific Mary Elizabeth Winstead) is in the middle of escaping a bad relationship. While in her car, she is sideswiped and sent spinning. Michelle eventually wakes up in a strange bunker, the “guest” of Howard (an equally amazing John Goodman). She eventually learns that something has happened on the surface of the planet, the air has been rendered un-breathable, and along with neighbor Emmet (John Gallagher), her “captor” has sought refuge in the well appointed space. Them, tensions rise as Michelle becomes convinced that Howard is no savior, but instead, perhaps, some sort of psycho. And then they get much, much worse.

Where’s the creature? Where’s the link to the original movie? Well, producer J.J. Abrams argues that this is more of a spiritual sequel, and on that point, he is 100% correct. 10 Cloverfield Lane might have connections later on to the world-ending elements in the first film, but here, we are dealing almost exclusively with the whole man vs. man dynamic. It will remind the savvy cinephile of works such as Wait Until Dark and Rope, the single setting used to evoke as much fear and horror as the potential apocalypse promised outside.

This is really a brilliantly acted character study, the constant reminders of the possible terror looming matched equally by the suspicious nature of Howard’s setup. Just the idea that a man would have an underground shelter like this, prepped for something he couldn’t possibly have known about when he began construction, signals that something is amiss. Then, when we learn about the fate of his family, the warning signs start flashing ferociously. As an experiment in insinuation, 10 Cloverfield Lane is amazing. It turns even the smallest clue into a reason to be concerned.

As mentioned above, the acting is beyond reproach. You need a strong lead to sell all these reservations and Winstead is wonderful at such suggestion. She’s also capable of true action star moments, all of which make her Michelle a viable center. Goodman, in turn, is a terrific villain (or perhaps, misunderstood man?) who can use his size as a means of intimidation. But he plays both sides of the fence brilliantly. His Howard is a lot like his turn as John Turturro’s tortured muse, Charlie, in the Coen brothers’ masterful Barton Fink. He seems sincere, but when the rage boils over, people usually don’t live to tell about it.

The questions about what is going on both inside and outside are what keep 10 Cloverfield Lane from falling apart. Our inherent curiosity and need for answers drive us, and like a seasoned pro, first-time director Dan Trachtenberg (he got his start in commercials) keeps us hanging onto the edge of our seat. When sudden shocks like a survivor at the bunker door or a mystery barrel’s contents are exposed, we feel a sense of relief, as well as even more confusion as the truths they suggest turn our understanding upside down. We get as lost in the circumstances as the characters, and that makes the movie a quiet and compelling thrill ride.

Yes, you may be disappointed in the “link” between the two films, but as a stand-alone spine-tingler with lots of dread, 10 Cloverfield Lane is a whole lot of nail-biting fun. 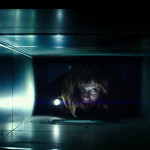 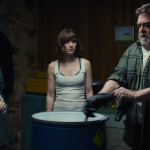 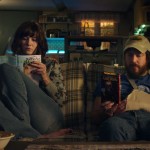