The 10 Best Religious Themed Films of All Time
By: Bill Gibron

There are a lot of genres that Hollywood gets right. This town appears to be full of experts at drama, action, comedy, family films, and with a few exceptions, science fiction, fantasy, and horror. One area where they tend to fail, however, is in the area of religion and faith. Something about Christianity (or any creed, for that matter) makes Tinseltown a bit… testy? They just can’t avoid either being preachy or just pathetic. Oh sure, they can provide us with the pageantry of an old fashioned all-star epic, but is that really a reflection of belief, or just an excuse to trot out your studio selection of contract players. For us, a true test of belief can be very compelling. The subject also opens itself up to insight and satire. In that regard, here are our choices for the 10 best religious themed films of all time. Some are obvious. At least a couple take God and his grace in different, defiant directions. All argue that, when done correctly, the sacred can be just as compelling as the secular. 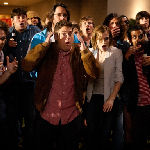 What? How can a meta comedy featuring several Friends of Apatow playing themselves be remotely considered for this category? Well, the answer is quite simple — the entire narrative is premised on the end of the world, Revelation-style. Jay Baruchel, Seth Rogen, James Franco, Jonah Hill, Craig Robinson, and Danny McBride face off against a legitimate look at Judgment Day, complete with raptured individuals, angrey demons, and an oversized Satan laying waste to the planet. The guys even end up in Heaven, so what more can you ask for, religiously speaking?

#9 – The Passion of the Christ 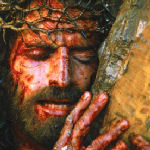 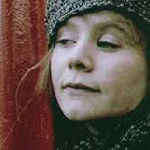 Lars Von Trier looks inward for a movie about faith and the farthest reaches to which someone will venture to seek God’s favor. Emily Watson plays a naive young wife who marries a spry offshore oil rig worker (Stellan Skarsgard). When he is injured severely while on the job, she asks the Lord for help… and he seems to suggest that she sleep around to save her man. Actually, it’s her paralyzed spouse that asks for such acts, but our heroine believes they are clear pronouncements of the Creator’s will. Freaky. 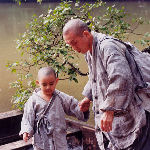 Not every religious film centers around Jesus and Christianity. In this beautiful affirmation of Zen Buddhism, a young monk and his mentor live in a monastery in the middle of a lake. Only accessible by boat (or over the ice during the cold), the film unfolds in five sections, using the seasons as an expression of faith, temptation, struggle, and triumph. One of the most beautifully photographed movies ever, it’s an intriguing meditation which asks us to question the connection between God, man, and nature.

#6 – The Last Temptation of Christ 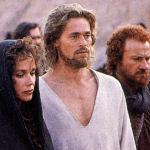 Martin Scorsese has always worn his faith like a badge of honor and for years he had dreams of making a movie of the controversial novel by Nikos Kazantzakis. Perhaps best known for its last act finale, where a hallucinating Christ is given a chance to come down from the cross and live life as a man, it drove Christians to distraction. Condemned before it was even released, this remains one of the American auteur’s most personal and revealing works. Its message of doubt and conviction is undeniable.

#5 – The Gospel According to St. Matthew 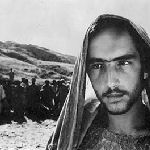 A decade before he made one of the most disturbing, godless, and scandalous films of all time — Salo, or the 120 Days of Sodom — Pier Paolo Passolini took on the story of Christ with both reverence and revisionism. Using elements of Neo-realism as well as a mostly non-professional cast, he created a beautiful and often quite moving look at Jesus from nativity to Resurrection. Better still, he used images lifted from the art of divergent eras to give the film an unique, anachronistic look. 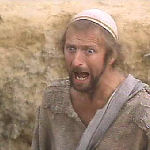 Like The Last Temptation of Christ, this film caused a huge uproar before it was even released. Viewed as mocking Jesus, the brilliant Monty Python masterpiece is really a denunciation of organized religion and blind faith without questioning. Christ has a cameo, while the main storyline sees a poor Jewish boy whose life is turned upside down when he is mistaken for the Messiah. With laser sharp wit and an eye for the hypocrisy inherent in their subject, the Pythons show why, sometimes, spirituality is specious at best. 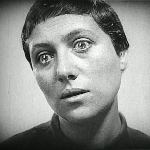 It’s one of the greatest films ever made. It’s also one of the most unusual silent statements in the entire genre. Using almost exclusively faces and closely framed shots of same, director Carl Theodor Dreyer relied on the actual transcripts of the famed martyr’s trial to forge a landmark in film. The emotion shown by lead actress Renee Jeanne Falconetti is so palpable and present that you actually feel her character’s intense faith radiating off the screen. It’s remains a powerful and important religious film. 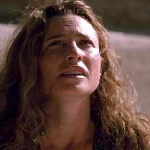 Like the movie we placed at #10 on our list, this film would seem, initially, very out of place here. The story centers on a 411 operator (remember those?) played by Mimi Rodgers who looks for fulfillment in the swinger’s lifestyle. One night, at the end of her rope, she is Born Again. Suddenly, she believes the world is going to end and tries to prepare herself and her family for the End of Days. Michael Tolkin’s film is brilliant in how it places Biblical revelation into everyday life… with chilling results. 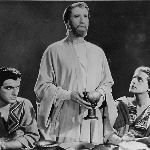 Before he became the King of the Biblical Epic, Cecil B. DeMille was… still the King of the Biblical Epic, and this is his greatest achievement. A stunning silent effort filled with spiritual grace, it is cinema at its most artistic. It is also moviemaking at its most basic and effective. There are no massive overriding themes or brave symbolism to overshadow the situations. This is a simple, straightforward saga (the last few days in Christ’s life) told with skill and stylistic sentiment.