The 10 Best Movies About Space
By: Bill Gibron

It’s the final frontier, an infinite expanse where few men (and some women) have boldly gone before. It’s inspired a wealth of daydreams and more than a little future shock. We tried to beat the Russians to it, looked at it with childlike wonder when Steven Spielberg presented us with a few close encounters, and now almost exclusively link it to a certain set of Wars, a particular multi-movie Trek, and more than a few unfriendly ETs arriving to overthrow and enslave us. Through it all, space remains a thing of awe and serious speculation, our desire to understand our purpose in life as a clash between science and faith. It’s the perfect metaphor for dreams and dead ends, invention and inspiration. So out of the many options out there, here are our picks for the 10 best films about space. Not all of them are 100% concerned with what’s out there. Instead, many focus on the more important element of what’s in us — and what we can learn when we finally do reach for the stars. 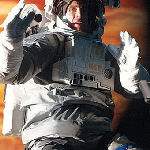 As with many movies about the exploring of strange alien worlds, this one has a twist at the end which, while not wholly scientific, certainly indicates why we are continually drawn to stories like this. As the ragtag group of multicultural astronauts get closer and closer to their goal, we see how the close confines of their ship and the bigger picture question of “what’s out there?” strains even the calmest of interstellar explorers. By the end, we have a deeper understanding of what space travel might really be like. 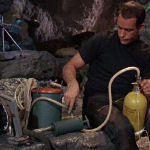 While some might consider this nothing but your typical ’50s drive-in schlock, there’s a lot more going on in this wonderful little gem than the story of a man and his monkey. Indeed, the concept of survival, of visiting strange new worlds and trying to decipher what’s a threat and what’s a benefit is at the very core of this film. Sure, there’s a little simian running around and our hero has a heck of a time once his “Friday” shows up, but for the most part, this is nice bit of cosmic speculation. 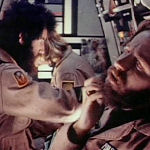 John Carpenter (yes, that John Carpenter) got his start as a filmmaker with this delightful dark comedy which, thematically, deals very convincingly with the potential pitfalls of space travel isolation — and perhaps, more troubling, the weaponization of same. While a second act attack by a sentient beach ball may seem silly, it offers up a chance for Carpenter and his collaborator, Dan O’Bannon, to riff on classic alien invasion tropes. By the time we see our ship sailing off into the unknown reaches of the universe, we feel we’ve been set adrift as well. 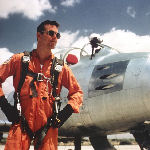 How we got into space in the first place is the subject matter behind Phillip Kaufman’s excellent adaptation of Thomas Wolfe’s equally amazing book. Dealing specifically with the pilots who first broke the sound barrier and, then, those who went on to take the greater risk of being shot into space atop a metal cylinder loaded with liquid explosive, the slightly comic entry argues for guts, courage, and a “right stuff” which helped turn our race into the cosmos against the Communists into a true contest of human ingenuity and resolve. 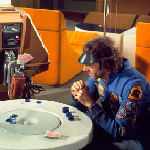 As with many films in the genre, the world has come to the point where life as we know it is no longer viable. So Bruce Dern acts as a kind of interstellar curator, in charge of a ship loaded with what’s left of the Earth’s agricultural and wildlife concerns. Naturally, a big conglomerate wants him to jettison his precious cargo and return the ship for a more profitable mission. With the help of his compact robot pals, he defies his orders while trying to rewrite the shape of things to come. 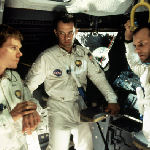 The terrific, terrifying true story of how Jim Lovell and the rest of this Apollo crew thwarted disaster when an oxygen tank exploded while they were on their way to walk on the moon. Deftly directed by Ron Howard and offering a technically accurate recreation of the events that occurred some four decades ago (including a convincing simulation of actual weightlessness), this is one of the rare thrillers which captures the majesty of space as well as the hopelessness of being trapped in it.

Harlan Ellison once wrote a famous short story about a man seated at the edge of our galaxy, growing more and more bored (and more and more insane) over his need to be ever vigilant and yet completely isolated as he watched the stars for an alien attack. Solaris is a lot like this, a work of slow-moving wonder where we have to decipher if our tired and overworked space crew are truly hallucinating, going mad, or merely experiencing some of the unfathomable, mind-altering changes that come when exploring a world which is not our own. 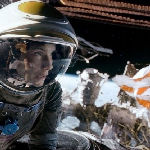 From a special effects position alone, Alfonso Cuaron deserves a lot of credit (and, perhaps, an Oscar). He pushes the medium far beyond anything we’ve ever seen before, giving audiences an actual glimpse of what it would be like to be part of a shuttle mission gone horribly, horribly wrong hundreds of miles above the Earth’s surface. Argue with the science all you want to or complain about the psychological sleight of hand in the last act, but this remains a true work of visionary wonder.

Danny Boyle needs to do more science fiction. His look at a rescue crew trying to get to our dying sun before it supernovas and destroys all life on Earth is so amazing, so heavy with deep philosophical and significant social conceits that it nearly rivals the film sitting at number one on this list. By giving us a true universal life or death scenario and then watching as dedicated men and women slowly loses their nerve, we experience the highest of stakes, and perhaps the most gratifying post-modern space movie ever. 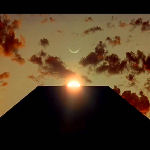 Here it is — the classic. The masterpiece. The sometimes indecipherable examination of man and his place within the (once thought empty) cosmos. Stanley Kubrick and Arthur C. Clarke wanted to avoid the goofball camp of the science fiction that came before, hoping to make their movie a “serious” examination of the possibility of life on other planets. The result is a cultural and cinematic benchmark, the moment when space went from a collection of stars and planets to a place of enigmatic questions and equally mysterious answers.